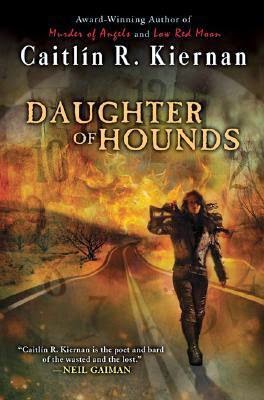 Daughter of Hounds is the first novel I've read by Caitlin R. Kiernan (although I did read the graphic novel Alabaster: Wolves in the spring).  I've had Daughter of Hounds on The List for a long time (I bought it several years ago at Chapters).  And now that I'm trying to clear out books that are taking up space (by which I mean I just want to read them but don't really want to keep), it was high time to read Daughter of Hounds.

I'm going to give a spoiler warning here.  I know I wrote on the side bar that I won't bother doing that anymore, but I'm planning on being particularly spoilery with this book.  You have been warned.

I had a really, really hard time reading this book.  Daughter of Hounds is split between two characters, Emmie Silvey, a strange yellow-eyed girl, and Soldier.  Soldier was a human child, stolen from her parents to be raised by the ghouls (so she's a Changeling, aka one of the Children of the Cuckoo).  And Emmie was quite obviously a child left in place of a human child.  I knew from pretty early on that Emmie was switched for Soldier, even though their ages didn't seem right; I give the book props for what happened to Soldier (her childhood was stolen, so she looked older than she actually was).

I was really torn as I read the majority of the book.  I found Soldier's chapters interesting.  There was a lot going on with the ghouls and Soldier's Changeling existence that was really interesting.  But every second chapter followed Emmie, an 8-year old girl whom I had no real reason to care about.  Sure, stuff was happening around her.  But nothing really drew me in.  It wasn't until the Daughter of the Four of Pentacles (Pearl) actually made her leave the house before she got interesting (and even that wasn't me being interested in her so much as being interested in the story a bit more).

I also didn't like how things would be mentioned, but never really shown in any detail.  Like Emmie's step mother had something wrong with her hand.  I'm really not sure what happened to her, but it was a detail the book mentioned and then didn't bother to explain.  Also, Deacon Silvey (Emmie's dad) was a drunkard who I thought drank because he lost his wife, but might have started because he wanted to dull his psychic powers.  That seemed odd, especially when he kept drinking rather than using his psychic powers to go find Emmie once she left the hose.  I didn't find this out until after I'd already read the book, but apparently Daughter of Hounds is the third book in a sort of series, so that's probably where some of this came from.  But there was a lot that I'd wished Kiernan had gone into more detail with.  Which made me laugh in a way, because this book was over 400 pages long.  There was room to go into more detail, but it just never really happened.