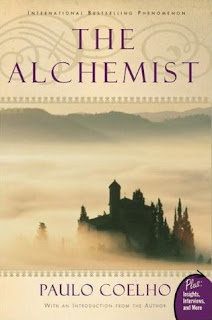 My brother wanted me to read Paulo Coelho's The Alchemist. He wanted to know what I would think. I confess that I wasn't really interested, but took it at his insistence. Like he said, it's a short book that I'd be able to read through super quickly (totally true - I read the majority of it over the last four hours, which were interrupted several times when my cat wandered into the room wanting to play). My mom was interested in reading it, but she's in the middle of another book, so this was the perfect time to read it before giving it to her. Oh, and I had just gotten a little over 100 pages through Dean Koontz's By the Light of the Moon and decided I was going to stop because it failed to hold my interest. So now was honestly the perfect time to read through The Alchemist before sending it on its way.
The Alchemist is the story of a Shepherd boy who after having the same dream two nights in a row goes in search of his Personal Legend: he must journey to the pyramids of Egypt to find his personal treasure. Along the way he meets many interesting people: a gypsy, a king, a merchant, an Englishman, his soulmate, and the actual alchemist of the title. These people and his journeys, both directly and indirectly, teach him about the universal language and the Soul of the World. It is through these lessons that he will find his Personal Legend and the treasure that awaits him at the end of his journey.
The Alchemist is an interesting read that will (and does) appeal to many people. It's telling you how you too can pursue your dreams, just like the Shepherd boy. Follow the omens (the road map that will point you in the right direction) and the world will conspire to get you there. Your journey will be hard as the world will test you along the way (to make sure you've learned the lessons it has taught you), but getting to the end of your journey will be worth it.
Unfortunately, I found The Alchemist to be a very heavy handed read. It would have been better with more subtlety, leaving both you the reader and the Shepherd boy to discover things along the way. But it tells instead of shows every single step along the way. It's also super repetitive, telling you things over and over again, drilling stuff into your head to make sure you get it. It's a real shame, too. The Alchemist has a good message; I just wish it had been a whole lot less didactic.
Posted by Shauna at 2:17 AM