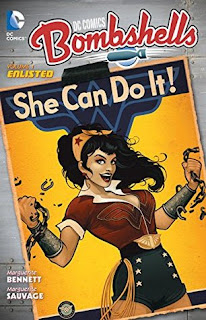 A friend of mine at work really recommended DC's Bombshells to me. The premise is that the DC superheroines and villainesses are recast into WWII era people. The men are off to war so it's up to the women to hold down the fort back home. Well, and to also go to war to stop the Nazis' mad scheme. Many of these women have new backstories (and nationalities), making for a very interesting take on the DC universe.

I think of all the new backstories, my favourite was Supergirl. In this world, Supergirl grew up in Russia with her human sister. The two enlisted in the army to eventually become Supergirl and Stargirl (the latter being a superheroine I am unfamiliar with). They're used for propaganda purposes by the Russians.

This was also my first encounter with Mera. I thought the was a lot of fun and was hoping she'd have her own comic (but it looks like she doesn't). :(

Unfortunately, I felt like this first volume of Bombshells was a little too all-over the place for me. Right when I was getting interested in something we'd shift to another character. I doubt that will happen as much in Volume 2 because most of the characters are together now. So maybe I'll keep an eye out for it in the future.
Posted by Shauna at 12:24 AM