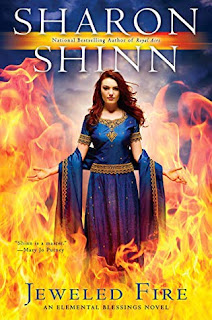 As I already mentioned when I read Royal Airs, I got Jeweled Fire through interlibrary loan after unsuccessfully trying to buy it in paperback a few years ago. The book arrived and I only had a few weeks to get through it so it could go back to its home library out of town.  So I've been reading it over the last few days to make sure it was finished in time to go back.

Jeweled Fire picks up just a few days after Royal Airs ended. Princess Corene has joined Steff and his grandmother, the Empress Filomara of Malinqua, on their journey to bring Steff home. She left without her father's permission (her father being Darien Serlast, so that's kind of a big deal).  Because she ran away in the middle of the night, the only one to accompany her is her bodyguard, Foley (he was Josetta's bodyguard, but told her he was moving on to another assignment because Josetta now had Rafe to watch over her).

Corene knows she is arriving in Malinqua as a potential suitor to one of the four potential heirs to Filomara's throne.  She is joined by Princess Melissande of Cozique, Princess Alette of Dhonsho, and Liramelli, the daughter of the prefect of Malinqua. Filomara has not yet chosen her successor, and Steff's arrival complicates the playing field, which otherwise consists of Filomara's nephews Garameno, Jiramondi, and Greggorio.  All three have a flaw: Garameno had a riding accident that has left him in a wheelchair; he is considered to be "half a man" by many people, and there is some question as to whether or not he can have heirs.  Jiramondi is, as Melissande says,  "sublime": he prefers the romantic company of men.  In Malinqua, that is considered a detriment.  And Greggorio, the youngest, looks the part, but is not terribly bright nor interested in running the kingdom (although people say perhaps advisors could make up for his severe lack when it comes to running the kingdom)?  The succession is further complicated because Filomara's daughters have both died, two of her brothers died, and the remaining two have been exiled from court because they are suspected of having something to do with the other brothers deaths.  As the bodies continue to pile up, it becomes increasingly clear that someone is trying to eliminate the competition.  And unfortunately Corene and her new friends are right in the middle of everything!

I absolutely loved Jeweled Fire.  I wasn't expecting to like Corene as much as I did.  But I loved the story of how she finally came to have friends she cared about.  She's no longer the spoiled and selfish princess that she fears she is (that her mother tried to make her into).  While she can still be quite sassy (and sometimes rude when she wants to be), she means well and is just a lot of fun.

I also really liked how she came to realize what she wanted out of life.  Corene had been raised to think she should be queen, so she came to Malinqua intending to secure her crown now that she has no place in Welce.  Her father is due to be crowned king, but she is being overlooked in favour of her half-sister to be his heir.  So Corene was left adrift, thinking that she was a burden on everyone, and I enjoyed reading about how she found her own place in life while also discovering that people do care about her for being herself, not for being a potential queen.
And of course, I loved her interactions with Foley.  Foley is a torz man whose only blessing to ever be drawn is "loyalty."  He is the perfect, no-nonsense bodyguard.  So when Corene wanders up and starts asking him ridiculous questions, their interactions get pretty great (especially in how they try to outmaneuver each other).  As the book continued, it became increasingly obvious that these two were meant for each other, and I was so happy when it finally happened that I cried (it was also a fairly emotional scene: Corene had to jump from a burning tower and he promised that he would catch her.  She didn't want to jump because she was terrified that landing on him would kill him. And he wanted her to jump because he couldn't stand the thought of her dying).

I also really liked Corene's friends.  Steff is so practical and blind to court politics that you just have to love him.  The three other girls were such opposites that managed to compliment one another, and they really looked out for one another.  And the heirs were all so intriguing: Garameno was the oldest who already advises the queen - he was knowledgeable, gallant, and didn't let his accident stop him.  Jiramondi was fun, and fit in really well with the group.  And Greggorio was a good person: he watched out for people and was always there to help.

As I said, I really did love this book.  Jeweled Fire is, at its heart, a story I think we can all relate to: finding our place in the world (and our people).
Posted by Shauna at 12:15 AM