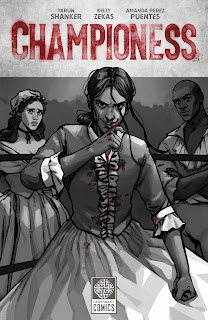 The library started getting some nonfiction graphic novels in and I snagged a couple.  The first one I read was Championess by Tarun Shanker and Kelly Zekas.  This is the (based on a true) story of Elizabeth Wilkinson, an eighteenth century female bare-knuckle boxer in London.  I'd never heard of her before, so this seemed like a really interesting read!

Elizabeth is determined to fight.  She's convinced that she can be a champion, having been undefeated in the barroom and back alley fights she's participated in.  Her dream is to win big and get her sister out of debt.  When her sister gives her the money to approach James Figg and ask him to teach her, she jumps at the chance.  But Figg refuses, and doesn't even really take her seriously because she's a woman.  So in a drunken inspiration, Elizabeth publicly challenges another female boxer to a match, claiming to be training under Figg!

I had never heard of Elizabeth Wilkinson before, so thought this would be a great way to learn about the female bare-knuckle boxer. I don't know how accurate this story is though -  I looked her up after finishing reading Championess and it sounds like a lot of the details of her life are rather sketchy (although interestingly, she was well known for quite awhile, but then forgotten in favour of James Figg because society was more focused on gender roles, which she defied).  I also later found this article on thegruelingtruth.com which sheds some interesting light on her and how she most likely was using a stage name as boxing was illegal at the time.

I quite enjoyed the relationship between Elizabeth and James Stokes, the boxer who Figg gets to train Elizabeth.  They both start out thinking they are better than the other for various reasons, but end up learning a lot from each other (in real life, it sounds like they married at some point, too).

Unfortunately, it appears that a lot of the story of Championess is fiction.  I found no record of Elizabeth having a sister (there seems to be little information about her outside of the documented fights).

There also appears to be no convincing evidence of her background being anything other than English, but I suppose that is open to speculation because so little is known about her.  That being said, in making her heritage half Indian, Championess make for a more nuanced story, adding racism into the mix along with the sexism Elizabeth experiences (and adds in that dimension to Stokes as well - I did a quick search and couldn't find any information on his background, so I do not know if this is historical or fiction).

While I do believe Championess is a mostly fictional account of Elizabeth Wilkinson's life, I did really enjoy it.  I also enjoyed how it opened all these research doors for me.  It's just a shame that so little is known of her life that this story couldn't have been more factually based.