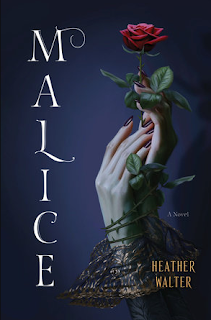 I stumbled on Malice by Healther Walter the other day on my first trip wandering around Chapters since the pandemic started.  It's a Sleeping Beauty retelling told from the villain's perspective.  It sounded fantastic, and though I was a bit leery that it was book 1 of the Malice series, I decided to give it a try.

Malice follows Alyce, a half-human half-Vila child who has always known she wasn't wanted.  In her world, the Vila were eradicated by an alliance of Fae and humans, reviled as evil creatures.  Submitted to horrible tortures when she was young, the Fae ambassador deemed her safe, and so she was sent to live in a Grace house, mixing elixirs for paying customers using drops of her blood.  While there are many Graces, half-human and half-Fae children whose blood shines gold with Fae magic until it is exhausted, Alyce is the only Dark Grace, able to craft elixirs for jealous nobles wanting to damage their rivals.  Despite being unique, no one lets her forget that Alyce is tainted by Vila blood - a monster, and different, someone to be reviled.

But then she meets the Princess Aurora.  Aurora is the last heir of the Briar Throne, cursed to die by Vila magic unless she finds True Love's Kiss.  And she is the only one to voluntarily seek out Alice's company, despite everyone else in the kingdom being opposed.

Overall, I really enjoyed Malice.  The world it is set in was really interesting, particularly how the Graces functioned within it, but also the history of Briar (it was a Queendom because an ancient Queen was able to succeed at a Fae challenge where many men had failed, but over the years the Queens had given away most of their power to their husbands so they were now largely only figure-heads).  I also liked a lot of the characters, although several of them really disappointed me as the narrative unfolded (I was particularly sad that Alyce embraced the villain role in the end a little too willingly - while I understand why it happened, it was really jarring because she was a good character all the way along to that point).  It started to lose me a little at the end unfortunately thanks to this.

But overall,  as I said, it was a great read.  I finished it off in three days, staying up way too late in the process.  I was really happy to get this into a book too because I've had a fairly dry reading spell as of late.  Thankfully, I'll be able to continue with the story soon: Misrule, the second book, is released tomorrow!  I've preordered it on my Kindle so I'll be able to finish the story soon!  And even more fortunately, they are only a duology, so I'll be getting the end of the tale with Misrule. :)