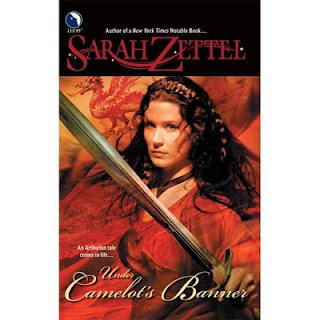 Several years ago, I found the first book in this series, For Camelot's Honor. At the time, this book was available in trade paperback, so I decided to wait until it was available as a mass market paperback. Unfortunately, that never happened; the other two books, In Camelot's Shadow and Under Camelot's Banner disappeared from bookshelves. I was lucky to find In Camelot's Shadow in a used bookstore in Toronto over a year ago. Under Camelot's Banner I found on ebay.
These books by Sarah Zettel tell the tales of the four brothers, Sir Gawain, Sir Geraint, Sir Gareth and Sir Agravain, as well as the stories of the four ladies who capture their hearts. Under Camelot's Banner tells the story of Sir Gareth and the Lady Lynet.
War is brought to the doorstep of Lynet's home. When her father is murdered, it falls to her to bring back the High Queen Guinevere to settle the dispute. Guinevere is the true heir to Lynet's lands, but she has long been absent in Camelot. With her sister remaining behind as a hostage, and aided by a magic mirror, Lynet must make the journey herself to bring the Queen back to her home and right the wrongs that have been done.
Along the way, Lynet meets Gareth, squire to Sir Lancelot. Upon hearing her plight, he pledges himself to help her. But due to Lynet's past, she does not believe in the honour of Camelot's men. Will Lynet trust him to help her save her land?
Under Camelot's Banner was an amazing story. I can't wait to get my hands on the final book to read the conclusion of this four volume epic!
Posted by Shauna at 4:29 PM