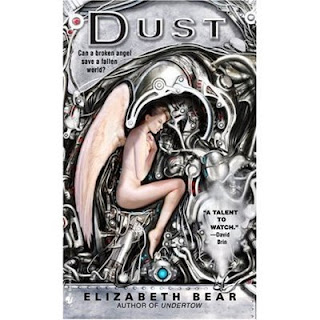 It was almost a year ago that I discovered Elizabeth Bear. A friend from work recommended Hammered to me, which I devoured along with the rest of the Jenny Casey trilogy. And now, after a long time away, I return to Elizabeth Bear's writing with Dust. Dust was recommended to me by another friend, who bought it on one of our many random book buying sprees at Chapters. I finally picked it up during their awesome annual sale.
Dust tells the story of two girls. Sir Perceval was captured in battle, her wings cut off. She waits only to die, to be consumed by her captor. Rien is the serving girl who was to attend Perceval, and who is also Perceval's lost sister. Together, the pair escape Rule and set off to find their father in hopes of stopping a war. Their journey takes them throughout their world, the ruined starship Jacob's Ladder, in an unforgettable story that I couldn't get enough of! Dust was a fantastic tale, and I can't wait for the next enstallment in the Jacob's Ladder series, which is coming this December!
I reviewed Dust, as well as the Jenny Casey trilogy, on Best of the Backlist. Click here to read the review!
Posted by Shauna at 1:41 PM