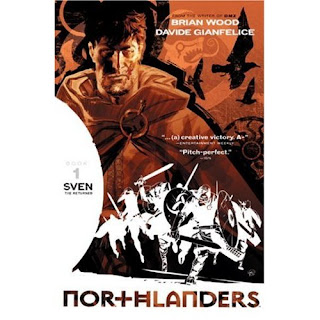 I grabbed this while I was at work because it looked and sounded cool. I mean, how can you not be intrigued by Entertainment Weekly saying it is "Vikings finally done right!"? So being sick of the crappy books I've read for school, I decided to give Northlanders, Book 1: Sven the Returned a shot.
Right off the bat, I have to agree: this is vikings done right. The story is brutal, with an art style to match. It suited the very idea of vikings. And Sven was sufficiently hard-core. But unfortunately, as with most of the things I've read lately, the story sort of died at the end. Maybe it was because Sven didn't have a particularly good reason to keep fighting here, or maybe it was because of some events which obviously happened behind the scenes, but there was no spectacular climax and nothing to keep me wanting to read more (or know what happens next).
Anyway, it was cool, but in my opinion not cool enough to recommend to everyone. If you really like vikings, you'll like this. Otherwise, you might be better off passing it by.
Posted by Shauna at 4:26 PM