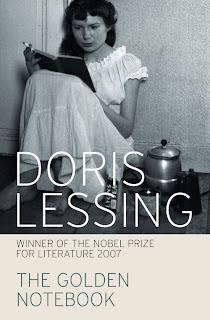 I am ridiculous happy to be finished Doris Lessing's The Golden Notebook. It's about 550 pages long, very choppy and tough reading, and I managed to read it in four days (yes, I'm very proud of myself. If I can pull that off, especially with two of the days being virtual write-offs because I was busy, I can get any book read for school!) :D
The Golden Notebook is the story of Anna, told mostly through her five notebooks. There's the black notebook, which contains her writing life (mostly made up of her adventures in Africa), the red notebook, which contains her political life (she's a member of the British Communist Party), the yellow notebook, which contains her emotional life (told through fictitious characters she invented), the blue notebook, which contains the events of her daily life, and the golden notebook, which she buys near the end of the book to tie the other notebooks all together. The notebooks are split up, so you do not get their full stories at once, by each other and by the narrative of her life after the notebooks.
When I originally read the back of the book, I was intrigued. I planned on reading it over Christmas. It sounded pretty interesting. But after talking to some people in my class who said it was terrible, I had a hard time starting it (hence starting it four days before we would discuss it in class). And unfortunately, they were right; I didn't really enjoy reading it. The Golden Notebook is just too choppy - I started liking a section (say the yellow notebook) but then it ends and I'd have to read several pages of boring blue notebook. A friend of mine said that it is dated, which is also true, making it harder to relate to. And I didn't really like the characters. Anna and Molly kept jumping into the same sorts of relationships with the same sorts of guys over and over again. And the men in the book were terrible people. Everyone was miserable, parts of the book didn't seem well-written, and I found about 4/5th (I'm being generous. It was probably more) boring. Definitely not a recommended read.
But I will say, if you do read it, remember what the first line of the book is. It comes up again later, and I didn't realize it until after we discussed it in class.
Posted by Shauna at 7:30 PM