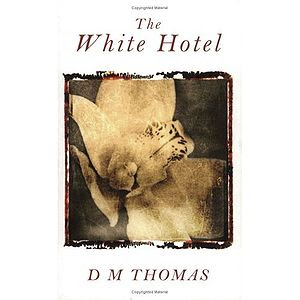 A friend of mine assured me that D. M. Thomas' The White Hotel was a good read. So after my struggle with The Golden Notebook last week, I was looking forward to something better. Unfortunately, I wasn't really impressed with The White Hotel. It was short, which was a major plus. But it definitely wasn't my kind of book.
The White Hotel is the story about an extremely strange dream that one of Freud's patients has. The book starts out with the lyric form in which the dream was originally written (after a few letters from and to Freud). Then it gives a more elaborate narrative account of the dream. The third part is from Freud's perspective, in which he psychoanalyzes the dream and cures the patient's hysteria. Then the final parts of the book deal with her life after being cured by Freud.
Unfortunately, I found the book to be rather dull for the most part. There were a few pages when the dream turned wacky which were interesting. And the end definitely got my sympathy. But overall I did not enjoy reading this. I'm not going to lie though, I wasn't looking forward to it when I realized it dealt with psychoanalysis. While it was interesting in novel form, I am not a fan of Freud and his theories, which may have given me a biased outlook right from the beginning.
I did, however, like it more than The Golden Notebook; the plots and characters weren't nearly as confusing in The White Hotel!
Posted by Shauna at 1:11 AM