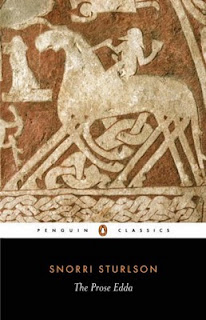 I know I said The Reluctant Fundamentalist was the last book on the term's reading list. And that's true. But Snorri Sturluson's The Prose Edda was a book I wanted to read to help me with a final paper (and it will be followed by the Poetic Edda).
The Prose Edda was written by Snorri Sturluson back in 13th century Iceland. In it, he recorded the old pagan mythology as best he could (he was writing a few centuries after Iceland was converted to Christianity and the old ways were being lost). As such, The Prose Edda gives us most of what we know of pagan Viking culture.
The Prose Edda was a fun read. It's pretty easy to get through, as long as you can make it past the long sections of ancestry (which were not as bad as those found in the Tain). It's a great overview of Norse mythology (and was a really good introduction for someone like me who only knew a very limited amount).
Posted by Shauna at 2:57 AM