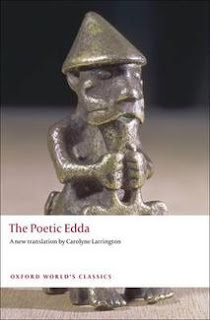 I was working on a different paper, but was having a lot of trouble with it. So to take a break, I decided to read The Poetic Edda, which conveniently also helps me with school work.
The Poetic Edda was a really interesting read. I'm glad I read The Prose Edda before it though, because Snorri's work really helped me understand a lot of what was going on. I also found that I'm getting familiar with the Norse structures and allusions (kennings in particular. There aren't many in Eddic poetry, but I can pick out some of the more simple ones referring to blood and warriors).
That being said, The Poetic Edda is still a bit confusing. I think a lot of the confusion stems from us just not knowing a lot about their mythology. There were a number of instances where the note for a confusing line might say that the original is confusing or there is debate among scholars.
But overall, I really enjoyed the Poetic Edda, both the first poems about the gods and the later heroic poems (particularly the poems relating to the Volsungs). I think the only poems I wasn't too fond of were the ones concerning Helgi. There were three of these. The first one was alright, but the second was confusing and the third seemed like a confusing copy of the first poem. They were alright, but not as good as the other poems in this collection.
Posted by Shauna at 2:48 AM