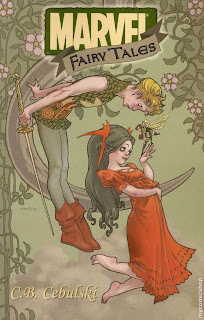 A few years ago (I think it was right before I started this blog) I read both X-Men Fairy Tales and Spiderman Fairy Tales. I found out Marvel was also writing an Avengers Fairy Tales, so I was really excited, having enjoyed the other two. But Avengers Fairy Tales took years before it was collected into a graphic novel. I finally got it this past June when I was visiting Toronto. I thought I would read it right away, but as you can see it's taken me about six months before I finally did (I attempted to read it a few months back but put it aside in favour of school books).
I'm not a big reader of Marvel comics, so I don't really know who most of the people are, specifically the Avengers (I'm a bit more familiar with Spiderman and X-Men). But that didn't stop me from enjoying this collection. As with the other two volumes, these fairy tales are retold using the Marvel characters. Marvel Fairy Tales has two stories I've read before (one each from the Spiderman and X-Men fairy tales) and then the 4 new Avengers tales: Peter Pan, The Wizard of Oz, Pinocchio and Alice in Wonderland. All four stories were a lot of fun to read, and I really wish I'd gotten to them sooner!
I was going to say that I have now read all of the Marvel Fairy Tales, but Wikipedia notes that there may be a fourth collection forthcoming starring the Fantastic Four. I'll definitely be keeping my eye out for that one (and will hopefully get to it a bit sooner)!
Posted by Shauna at 9:55 PM