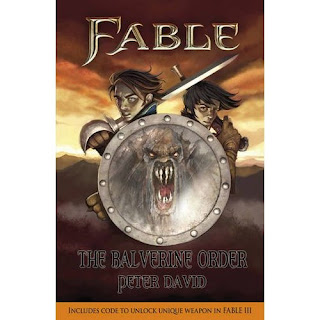 Fable: The Balverine Order was my first non-school book since the summer. I found it at work, but decided to buy it because it comes with a code for a free weapon in Fable 3. As I told a friend, I was hoping the weapon would be awesome (because I've been so busy with school, I still haven't actually redeemed the code so I don't know). As far as I was concerned, the book itself might be an added bonus if it was good.
I was a bit doubtful on that score. The very premise made me laugh. Two guys go off on a search for the rare and illusive balverine. This sounds like a great premise - except that within the Fable games that I have played, when you hit a certain level you can't go about 10 feet within the game without tripping over balverines (I exaggerate - the actual number is probably closer to 50-100 feet). So everytime someone in the book talked about the "rare" balverine, I thought it was really funny.
But hilarity aside, The Balverine Order was really good. This is the story of Thomas and his servant/friend James. Thomas is haunted by the past - when he was younger, his brother was killed by a balverine (which is kind of like a werewolf, but specific to the Fable universe) and he was the only one who saw it; everyone thinks this story is the imagination of a young boy because balverines aren't real (they say it must have been a big wolf that killed Thomas' brother). After years of being called a fool, Thomas' mother's death serves as the catalyst that sends Thomas off on a quest to prove to himself that what he saw was real. He is accompanied by James, his only real friend in the world. Together, they travel through Albion and beyond on their hunt for the illusive creatures.
This was the first book that I'd ever read by Peter David. Before buying it, I did a bit of research and he seemed to come highly recommended. And after finishing The Balverine Order, I am inclined to agree with the recommendations. It's a quick read, but it's filled with excellent characters and grand adventure; I really enjoyed it.
Posted by Shauna at 5:58 PM