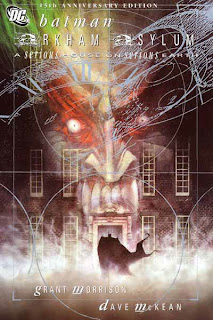 I honestly don't have a lot to say about this one. I finally bought the Arkham Asylum 360 game and decided I wanted to read the graphic novel before beating it (I've played through quite a bit of the game at a friend's place so I know a lot of the story for it). I was prepared for the graphic novel to be a bit weird, especially with the art of Dave McKean, but I really wasn't prepared for this. My big problem was that I had a hard time following the story. There were quite a few parts where I wasn't sure what was going on. There were other parts where I couldn't follow the panels (by the end I figured them out but there were a few places where it looked like you could read them in a couple of ways). And I had a hard time reading some of what the Joker said (his speech was written in crazy letters in red ink).
The basic idea is that the inmates of Arkham take over and want Batman. Batman rises to the challenge (mostly going so the inmates will give up their hostages relatively unharmed). But once inside he has to struggle with his own sanity as well as those inside. Running parallel to Batman's story is the story of Arkham, the owner who converted the house into an insane asylum.
There were some cool moments (like Two-Face being weaned off of his coin). I'll probably try rereading it one day (as an attempt to better follow the action). But all in all this definitely wasn't one of my favourites.
Posted by Shauna at 3:24 AM