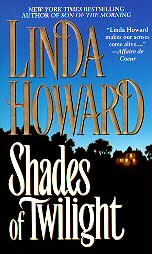 Back when I read Linda Howard's To Die For, I said that I do not really like romance novels but I do like Linda Howard's books. And that still holds true. While I haven't touched a romance in a long time, I was immediately hooked when I started reading Shades of Twilight last night. The story was really interesting and I really liked the characters. Oh, and like Heart of Fire, Shades of Twilight is told from both the man's and the woman's perspective, which I really like.
Shades of Twilight is all about the Davenport family who lices in Arizona. Roanna and Jessie are cousins who lose their parents in a car accident and are taken in by their grandmother Lucinda. Jessie grows up like a princess, popular and beautiful, while Roanna is the clumsy, mischievious one. Roanna is in love with their other cousin, Webb, but he is the heir to the majority of the Davenport fortunes. As expected by everyone, he marries Jessie (although their marriage is far from happy).
But then one night Jessie is murdered and Webb is briefly accused. Everyone in the family except Roanna does not support him, so after the whole business is cleared up he leaves for 10 years because of their betrayal. Nearing the end of her life, Lucinda wants to make amends with Webb and asks Roanna to bring him back.
The years have been hard on Roanna. She always felt like she couldn't do anything right and that no one loved her, especially after Webb betrayed her by leaving. To protect herself she has withdrawn into herself and tries desperately not to feel anything so she will not be hurt. But the only person who can pierce through her armour is Webb, whom she still loves.
Shades of Twilight is the story of two people finding each other even after all of the betrayals and heartaches. It is also the story of the entire Davenport family and what becomes of them, especially after Webb's return brings out someone trying to finish the job that started with Jessie's murder by killing him. While it's not my usual read, I did enjoy it (having powered through over two thirds of it last night).
Posted by Shauna at 3:33 AM