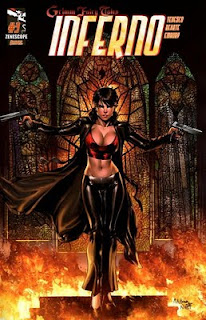 I found this series at Chapters the other day. I've never heard of it before, but it seemed really interesting. I decided to buy Inferno because it seemed to sort of stand alone from the others.

Grace Dante suffers from amnesia. She was told she was in a car accident; she can't remember her life before that time. Grace has started having schizophrenic hallucinations. She's also being sexually harrassed by her boss, abused by her boyfriend, and over-medicated by her therapist. But then she meets Sela Mathers, who promises to help Grace see the world more clearly and remember her past.

There's a lot of really cool stuff that happens in Inferno. But I kept feeling like I was in the middle of the story, and that I was missing some major pieces of what happened before this. Inferno helps a bit with that by reprinting a couple of the missed bits at the end of the story, so when you're finished reading this volume you have a pretty good idea of what happened. But I think you'd be better off starting at the beginning of the Grimm Fairy Tales series before jumping into Inferno.
Posted by Shauna at 3:20 PM