Ever World: Understand the Unknown 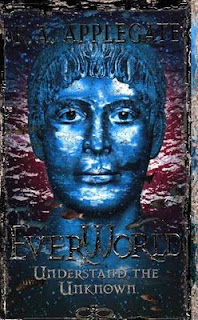 This time around it's David narrating once again. After leaving Egypt, the group found a boat that would give them passage back to Greece. A little way into their journey, they realize they're being followed by a magical boat: Merlin. Merlin is after Senna, but not to use her like Loki wants, but to lock her up so no one can use her. Merlin is about to catch them when Neptune appears, upset that the wizard has used magic and in so doing challenged the God. Neptune then throws a hissy fit, sinking the two boats and sending all of the occupants into his city beneath the waves.
After escaping Neptune's wrath (and city), the group finds themselves in Atlantis, where they meet another man who has crossed over from the "real world" (the mayor of Atlantis). He tells them about the Great Scroll, which has all of the rules of how Ever World works written on it. Whoever has the scroll can rewrite the universe. Senna now wants it so she can seize power. April, Christopher and Jalil want it so they can go home. And David, unknown to the others, has a sneaking suspicion of where it is.
I'm approaching the end game of the Ever World series now. Understand the Unknown is book 10, meaning there are two to go. It was also the only book the library was missing from the series, so I'm going to donate it now that I've read it. Understand the Unknown wasn't the best of the bunch, but it was full of important revelations, making it a must-read.
Posted by Shauna at 10:49 PM