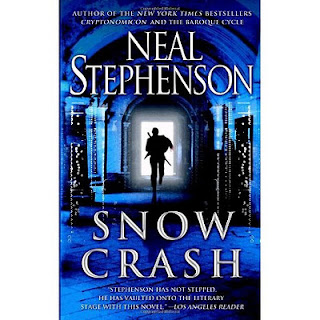 A friend of mine has been wanting me to read Snow Crash for awhile now. So when I found out that Neal Stephenson was going to be the keynote speaker at GDC Online (which I attended), I decided it was time to give Snow Crash a read. My friend lent the book to me, but in the interest of travelling as lightly as possible, I bought the book on my Kindle. I started reading it on my flight to Texas and got about 40% through it....and then didn't pick it up again until a few days ago.
Snow Crash is a really interesting book. It's got some unique characters, like Hiro Protagonist, the sword-toting hacker who delivers pizza for the Mafia's franchise, and Y.T., a young Kourier who manages to be in the thick of everything. Hiro and Y.T. get caught up in the search for information on a virtual drug called Snow Crash, which crashes the minds of hackers who are exposed to it.
My problem with Snow Crash was simple: it started out as a really interesting book with the pizza delivery stuff, but then it kind of lost my interest when Hiro started "researching." I say "researching" because it was more along the lines of the Librarian lecturing Hiro. Hiro would ask a question or two, and the Librarian would lecture him for a few chapters. At this point, there would be a chapter of Y.T., the other protagonist, doing something crazy, then back to the lecture. I don't know exactly how long this went on for, but my estimate is 30% of the book. Then, after Hiro was done listening to the lecture, he went off on his own adventure, during which he decided to regurgitate everything the Librarian had told him!
Despite this, there are some really interesting (and awesome) things that happen, particularly with Y.T. The chapters with her really helped me get through the Librarian's lecture.
All in all, the story of Snow Crash was pretty good, but I really didn't like being lectured at. I almost stopped reading Snow Crash a few times because of this. But I soldiered through and did finish the book. But I'm not going to lie, there were more than a few times when I thought I could be reading something else. And now that I'm done, I'm more excited to start something else than to dwell on Snow Crash.
Posted by Shauna at 12:58 AM