Bearers of the Black Staff 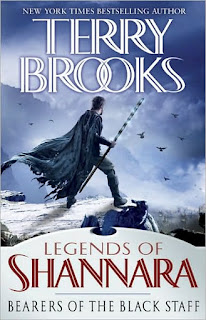 It's been three years since I last read a Terry Brooks book. So I'm not going to lie, I was extremely happy to finally be reading Bearers of the Black Staff.
Five hundred years after the events of The Gypsy Morph, the wall of mist that has encased the valley and its inhabitants is weakening. The last Knight of the Word, Sider Ament, is the first person to see the outside world. Unsurprisingly, what has survived is a rather brutal and savage land. And that land is intent on intruding on the world the valley inhabitants have created for themselves.
Two human trackers and their elf friends are the next people to make their way out of the valley. And unfortunately for them, they stumble right into the middle of the outside world's attempts to get inside. A massive army of Trolls (the people who were formerly known as Lizards) are on the lookout for a new home. And they've decided that the valley is perfect for them. So it falls to one of the trackers, Panterra Qu, to try to organize a meeting of the valley's leaders with the troll leader by the next full moon. Unfortunately, the valley's people are not as unified as Pan made them sound to the trolls.
I have to say, I really enjoyed reading Bearers of the Black Staff. Sure, there were some things that seemed rather predictable to me. But I thought it was a great extrapolation of what life would be like for the valley people when their protective mist barrier finally failed. And of course, there are some great characters, like Prue Liss (the second of the human trackers), the elven twin brothers (friends of the human trackers), and Deladion Inch, the mercenary from the outside world. Bearers of the Black Staff was a great story, and I can't wait to see how everything ends in The Measure of the Magic!
And yes, it feels great to be reading a Terry Brooks once again.
As a side note, I wandered onto terrybrooks.net today, and found, among other things, that he is offering his short story "Imaginary Friends" for sale on the Kindle and Nook for only $2.99 for the next month and a half. All of the proceeds will go to helping Shawn, his faithful Web Druid, pay off his medical bills after successfully battling cancer. You can read more info and find the links to download the story here. (As a side note to my side note, if you don't have either ereaders, you can still read the book on the free Kindle app).
Posted by Shauna at 10:24 PM