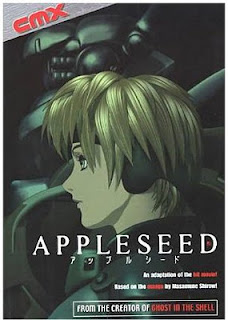 I came across the Appleseed dvd at HMV a few weeks ago. I don't watch much anime, so while the concept intrigued me, I didn't really want to buy the movie then and there. I decided to see if the library had it instead. They didn't have the movie, but they did have a couple of the manga.
What they have labelled as volume 1 turned out to be an adaptation of the movie I was looking at in HMV. Now I'm not going to lie, but it was really hard to follow what was going on. A mercenary (?) named Deunan Knute is brought to the utopia Olympus. A lot of people are after her and I wasn't really sure why. But in Olympus, there are both humans and bioroids (a genetically modified and created new race). The city's administration have decided that humans should no longer live, so it falls to Deunan and her long lost partner Briareos (who is now a cyborg) to stop them.
I have to say, I liked the story, or at least the parts I was able to follow. But the pictures looked like they were screen captures from the movie and it wasn't always clear what was going on. For that reason, my advice is to skip this graphic novel and just watch the movie (although the movie might be just as tough to follow as this was. I'll let you know once I watch it!)
Posted by Shauna at 2:11 PM