Jane on Her Own 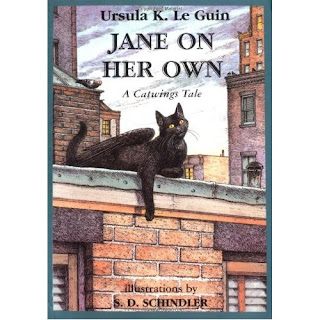 Jane on Her Own is the final book in Ursula K. Le Guin's Catwings series.  Jane decides that the farm is boring; she wants adventures!  So she decides to leave her family and friends at Overhill Farm and strikes out on her own, eventually heading back to the city where she was born.

She has a lot of trouble finding new friends though.  Birds are either afraid of her or are dangerous (like the Owl from Catwings).  Cats don't realize she's a cat, and are likewise afraid of her.  People want to catch her.  And dogs want to chase her.  So one day Jane flies into a window.  The man there doesn't try to catch her, but instead offers her something to eat.  He takes care of her, but closes the window on her, trapping Jane from leaving.  He gives her the finest foods and toys, but brings in men with cameras who make her perform for them.  It is only after Jane tries to get him to open the window for her and he refuses that she finally understands that sometimes cages are a bit bigger than you would expect.

Jane on Her Own was probably my least favourite of the Catwings books, but it was still a really good read.  I'm sad that it is the last of the series; I would love to read more!  But since I can't, I'm happy to have all four books now; I can read them whenever I want to!
Posted by Shauna at 4:13 PM