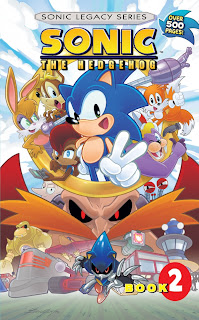 Anyway, I apologize, this has been mostly me ranting.  I enjoyed this graphic novel, but most of my enjoyment may have come from nostalgia.  I don't really recommend it though because of the missing comics that are referred to (specifically the Sally and Tails miniseries).  And I am hoping Volume 3 won't let me down in regards to Mecha Madness.
Posted by Shauna at 9:47 PM