Library Book: The Queen in Winter 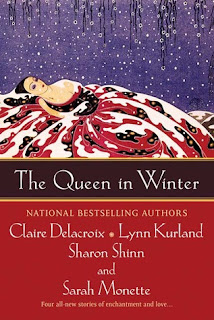 After reading To Weave a Web of Magic, I immediately started reading The Queen in Winter.  It has stories from three of the four authors of the other book (replacing Patricia McKillip with Sarah Monette) so I was ready to be wowed.  Unfortunately that really wasn't the case.  Sure, I enjoyed these stories, but overall I thought that To Weave a Web of Magic was better.

This time Lynn Kurland's story "A Whisper of Spring" opens the volume.  This is the story of how Symon won the hand of Iolaire from her father, the Elf King.  Well, that happened after he helped her escape from Lothar's clutches.  I really liked that Iolaire wasn't passive; she managed to escape from her cell by herself.  I liked some of the characters (like Symon's father, who was hilarious) but overall this story was just okay, especially after Lothar was bested (which just sort of happened in a rather anti-climatic way).

Next up was Sharon Shinn's "When Winter Comes."  I was expecting to enjoy this one, having really liked all of the other stories I've read by Shinn thus far.  "When Winter Comes" takes place in her Twelve Houses world, which is somewhere I am completely unfamiliar with.  It is the story about two sisters trekking across the land.  One was kicked out of their house mecause she had a mystic baby.  The other sister chose to go with her.  So together they are looking for a safe place to raise the baby in a world which is deadly to mystics.  The premise was alright, but I found this story sort of plodded along until it came to an end.  The story was somewhat predictable and all around just ok.  Of the three Sharon Shinn stories I've read so far, this one was definitely my least favourite.

Claire Delacroix's "The Kiss of the Snow Queen" came next.  When I first started reading it, I really didn't like it.  I think it had a lot to do with the main character sort of waffling about what to do for a loooong time.  But once her decision was made, the story suddenly got a lot better.  "The Kiss of the Snow Queen" is sort of a retelling of "The Snow Queen."  Gerta is a seer, who is bethrothed to a horrible man.  Her and her father (the king) were forced out of their land by the Cath Palug, a nasty cat thing that killed her father's best warriors.  Gerta summons a sorceror named Cai to help.  she is also hoping that if he bests the Cath Palug, she will be given to him instead of to her bethrothed.  Unfortunately the Cath Palug bests him; she watches (through her mirror) as the cat drags him away.  Meanwhile a shadowy being enters Gerta's room and talks her into journeying to the Cath Palug to save Cai.  This being calls himself Loki; he is one of the Fallen Angels.  Loki himself is at odds with the rest of the story.  He speaks in a modern way, which ends up quite funny, particularly when he speaks to Gerta, who often calls him on his speech (ie "You speak nonsence again").  The two of them make quite the pair; overall it is their interactions that made this story pretty good.

The final story is Sarah Monette's "A Gift of Wings."  The beginning of this story was hard to get through; there are a lot of weird names of people and places (and no map to help keep it all straight!)  I found out after reading it that "A Gift of Wings" takes place in her world Meduse (where her Doctrine of Labyrinths books take place).  Once you get passed all that though, "A Gift of Wings" is a super good story.  It's about Maur, a wizard who was cripled in a war (both his hands and his magic), and Agido, a soldier who loves him. The story is about them learning to trust each other again in the wake of that war.  This is compounded by the fact that Maur was also hurt by the people who were supposed to be helping him heal, and so he is cold to Agido because he is trying to protect himself from being hurt like that again.  The story also has a murder mystery thrown in, which was interesting but a bit hard to follow (once again because of the names).  Agido is blamed for the murder, so she and Maur have only a few days to prove her innocence before the watch shows up.

So overall, The Queen in Winter was an alright read.  I think it would be better if you are more familiar with some of the worlds the authors are writing about (particularly for Shinn's and Monette's stories).
Posted by Shauna at 1:05 PM