Library Book: To Weave a Web of Magic 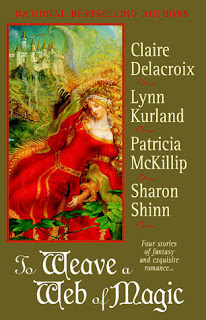 I decided to read To Weave a Web of Magic because of Lynn Kurland.  One of her books caught my eye at work; unfortunately the book wasn't the first in the series. So I did a bit of research on her work and found that she had written a short story related to that book both in To Weave a Web of Magic and in The Queen in Winter.  I was originally planning on reading only Lynn Kurland's and Sharon Shinn's stories (Kurland's being "The Tale of the Two Swords," and Shinn's "Fallen Angel;" I've read a short story by Shinn before and really liked it).  In the end I decided to read all four stories.  And I'm glad I did; I liked them all!

The first story is Patricia A. McKillip's "The Gorgon in the Cupboard."  I've never read anything of McKillip's before, so I really didn't know what to expect.  "The Gorgon in the Cupboard" was a quirky story about a painter looking for his muse and finding her in Medusa, who starts talking to him out of one of his paintings.  Along with inspiring him and his painting, Medusa pushes him to see beyond his painting to the women who model for him and his friends as the people they really are.

Next came Lynn Kurland's "The Tale of the Two Swords."  This story had a framing narrative; an eight year old boy wants an adventure, but agrees to having his father tell a story instead.  And so his father tells him and his two siblings the tale of how the king and queen of the land met.  The girl, Mehar, ran away from her father and an unwanted arranged marriage.  Gil (short for Gilraehen) is the crown prince of the land.  He saw his father killed and was himself wounded, having to flee the battle against his uncle.  The two meet at the king's hidden castle; Mehar was going there for help, Gil was hiding while his people regrouped.  The two start to fall in love, even though their love cannot be; Mehar is below Gil's station and Gil is betrothed.

The third story was Sharon Shinn's "Fallen Angel."  I've read one of her stories before and enjoyed it, so I was looking forward to "Fallen Angel."  And it didn't disappoint.  This is the story of Eden, a Manadavvi woman who falls in love with a forbidden angel named Jesse.  As a Manadavvi woman, Eden is a society girl, waiting for her father to choose her husband for her.  And Jesse is a free-spirit and a troublemaker, exactly the kind of person she should not fall in love with because she knows they can never be together.  But Jesse shows her how shallow her life is, how boring, and makes her want to be free, like him.

The final story was "An Elegy For Melusine" by Claire Delacroix.  Delacroix is another author I am unfamiliar with. Her story is about Melusine, a half-mortal Fey who strikes a bargain with a mortal man named Raymond.  She wants to be free of her mother's curse, and so needs a mortal man's love so she can live forever in the fey world.  Of course, Melusine did not bargain on love.  And it is that love that is her undoing.

All four stories in To Weave a Web of Magic were excellent.  I enjoyed reading everything, and now I'm really looking forward to The Queen in Winter, which features stories by three of these four authors.
Posted by Shauna at 4:29 PM