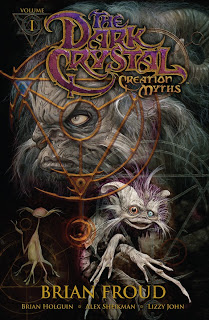 A friend of mine told me about The Dark Crystal Author Quest, a contest the Jim Henson Company is putting on to look for an author to write a new book set in the world of The Dark Crystal.  I have always loved the movie, but I've had trouble thinking of the world as anything other than that movie.  So I went to the library looking for The Dark Crystal graphic novels; they only had one, but have ordered the other three I wanted to read through their inter library loan (illo) service.  The first one, The Dark Crystal Creation Myths, Volume 1, came in for me almost immediately.  I had to put off reading it until after I got back from San Francisco.

The Dark Crystal Creation Myths, Volume 1 is made up of several different tales, all within a framing narrative.  The framing narrative starts out in Chapter 1: A Tale Well Told, which shows a mysterious hooded figure who has a companion that is the same species as Fizzgig.  The figure has agreed to share stories as payment.  And so once darkness falls, he or she begins.

Chapter 2: The Birth of Aughra, is the story of the beginning of the world, known as Thra.  Aughra was born to give voice to the voiceless and sight to the sightless, providing a link between the world itself and all the creatures that inhabit it.  She watched over the world and its inhabitants, most especially the gentle Gelflings.

Chapter 3: Strange and Distant Stars tells of a later time, when Aughra has turned her attention to the stars.  This is the story of the first great conjunction and the coming of the Urskeks.  This was also where Raunip, Aughra's son, was first introduced.

Chapter 4: A Song of Tides, was an interesting sort of interlude from the main story, which involves Aughra and her son, Raunip.  A Song of Tides is the story of Gyr, a traveller who collected songs.  He dreamed of an older song that had become lost and forgotten, and so sets out on the sea to find it.

Chapter 5: The Secret Behind the Stars, has Raunip, who has always been distrustful of the Urskeks, try to incite the Gelflings to rise up against them.  He has seen a darkness within the interlopers that others, including his mother, have been blind to.  He also learns that the Urskeks who have arrived on Thra are not ambassadors, but were banished from their home world.

At the end of three of the chapters, there's a short story as well.  The three are "The Covenants of Thra," which is an excerpt from an epic poem by Fellen the Elder, "How the Gelfling Maid Got Her Wings," which tells one version of how Gelfling women first got their wings, and "Jarra-Jen and the Horn of Thunder," which tells how Jarra-Jen freed the Gelfling slaves from Creghel's tyranny.  All of these were fun little excerpts.

The final story in the book is the special 8 page Dark Crystal story written for free comic book day.  It pretty much gives an overview of the main story within Creation Myths, Vol 1, while also hinting at what is yet to come.  I liked that it was included at the end of the book; I don't think I would have wanted to read it before the book came out.

All in all I really enjoyed The Dark Crystal Creation Myths, Volume 1.  The art is beautiful, as befitting something set in the world of Thra.  But what's more, Creation Myths really got me thinking of Thra as more of a living land.  There's much more potential for stories there than I was previously able to imagine.
Posted by Shauna at 2:06 PM