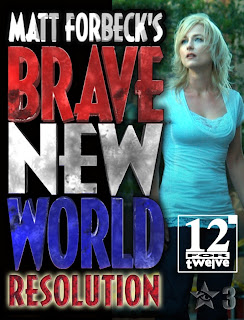 I started reading Matt Forbeck's Brave New World: Resolution a few days ago, but wasn't able to finish it until just now.

In order to talk about Resolution, I'm going to be giving some spoilers.  So if you haven't read the book, or the previous one, you might want to stop reading this now.

I have to admit, the beginning of the book wasn't really working for me...it felt a little too removed from what had gone on before.  And I guess it was rather removed from the events of Revelation; Resolution opens with everyone safely on Isla Delta, having to explain how they got there. And then the action starts.  Delta Prime invades the island, and everyone except for Patriot (and Terri, the delta who is flying him around) get captured.

I'm not going to lie, but it was at the end of all this (about halfway through the book) that I stopped reading.  Yes, I was busy.  But the way things played out, I wasn't really in a hurry to get back to the book.  But when I finally did start reading again (earlier today), I was once again blown away by how great of a storyteller Forbeck is.

So anyway, everyone is captured, and Patriot needs to rescue them in a hurry, because Delta Prime is forcing Street and another gadgeteer named the Supplier to build a bigger bomb than the one that removed Chicago from the Earth.  But the two of them have found a way to send someone to Chicago.  And so Lisa goes, taking with her the plans to build a similar device there to bring everyone back home.

Of course, nothing goes smoothly.  As a diversion, Patriot and another delta manage to reveal the identity of the President.  And unfortunately he isn't who they thought he was...

The end of Resolution was fantastic.  There's no two ways about it.  It's a fast-paced ending with a lot of unexpected things happening.  This was a fitting end for the trilogy, and I'm really glad Forbeck was able to write this series, thanks to the funding he got on Kickstarter.  I'm looking forward to reading more of his books!
Posted by Shauna at 4:10 AM