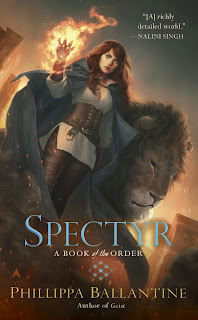 After reading Philippa Ballantine's Geist, I was excited to get started on the second book, Spectyr.  Luckily the library had it, so I was able to get it almost immediately (unfortunately they don't have books 3 and 4, so I had to order them online).

Spectyr picks up pretty much where Geist left off.  Sorcha and Merrick have been sidelined by their new Abbot (he keeps sending them into really boring missions).  Raed is off across the sea.  But the two Deacons receive a vision of Raed in trouble, and so a convenient diplomatic mission sends them off the Chioma, a part of the Empire which is rather unique from the rest because they still worship one of the old gods, Hatipai.

Elsewhere, the Grand Duchess Zofiya, herself a worshiper of  Hatipai, receives a divine message from the goddess.  Zofiya unknowingly sets her free.  And so Hatipai begins gathering her power once again to take control of the world and in the process feast upon the Rossin.

I really enjoyed Geist, so I was disappointed that I had a really hard time getting into Spectyr.  I don't know what exactly the problem was, but I just didn't connect with the story for the most part.  But then the end happened, and now I can't wait to read the next book, Wrayth.
Posted by Shauna at 11:25 PM

Labels: A Book of the Order, fantasy, library, Philippa Ballantine

Spectyr was my least favourite Book of the Order, but it definitely has my favourite cover!