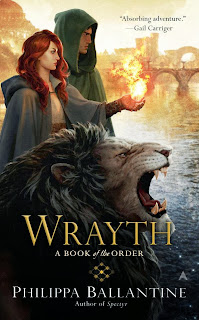 After my disappointment in the beginning of Spectyr, I was a little hesitant to begin reading Wrayth so soon.  But luckily that fear was misplaced.  I read over half of Wrayth in one sitting; I would have finished it sooner but I wasn't able to fully devote my time to reading.

Once again, Wrayth picks up pretty much where Spectyr leaves off.  It is two months after the events in Chioma.  Sorcha is still unable to move but she is conscious of everything happening around her.  Even more frustrating, her bond with Merrick is still present but not as strong as it should have been and so she is stuck inside of her own head.

For his part, Merrick has been at Sorcha's side as much as possible, fighting to keep her as his partner.  Unfortunately as one of the strongest of the Order, the new Arch Abbot doesn't want him sidelined for long and is working on getting a new partner for the young Deacon.

But then Sorcha is kidnapped.  Intending to abandon the Order to go search for her, Merrick goes to ask the Emperor's sister, Grand Duchess Zofiya, for a favour.  But events spiral out of his control when he realizes the Emperor's new favourite is one of the men who tried to kill his mother back in Chioma.

Off elsewhere, Raed is hunting down his sister, Fraine.  The princess has been seeking new allies in an attempt to start a civil war against the new Emperor.  And unfortunately for everyone, her newest ally is a geistlord.

Wrayth was an excellent book.  I can't wait to see how the story ends in Harbinger!
Posted by Shauna at 7:23 PM