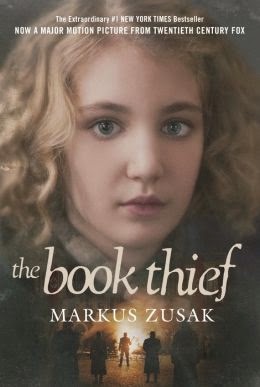 My mom and I both wanted to read Marjkus Zusak's The Book Thief, so we picked it up from a local used bookstore.  She read it first, then gave it to me.  The book's a bit long (550 pages), but I thought I'd get through it pretty quickly because it's YA.  Obviously that didn't happen - I started it just after finishing Teeth, and just finished reading it now.

The Book Thief is the story of Liesel Meminger as told by Death.  Liesel stole her first book at her little brother's funeral.  From there, she went on to steal several other books between 1939 and 1943 while living in Molching, Germany with her foster parents, Hans and Rosa Hubermann.  While Rosa is extremely gruff, Liesel immediately takes a liking to Hans (her papa), the accordion-playing painter who has a kind soul.  Liesel and the boy next door, Rudy Steiner become best friends and partners in crime, getting into all kinds of mischief together.

Life changes when Max Vandenburg appears. Hans had made a promise to Max's mom years ago that if she ever needed anything, he would help.  That promise comes back to haunt him during the Nazi's reign of terror when she asks Hans to help her Jewish son.  While this puts their family at risk, Hans and Rosa unquestioningly take Max in, hiding him in their basement.

While I liked The Book Thief, I ran into problems reading it because I felt like it dragged at times.  It didn't help that the narrator (Death) would often say what was coming, but then take his time to get there.  But that aside, The Book Thief was an excellent story about the 10% of Germans who did not agree with the Nazis during World War 2.
Posted by Shauna at 1:33 PM