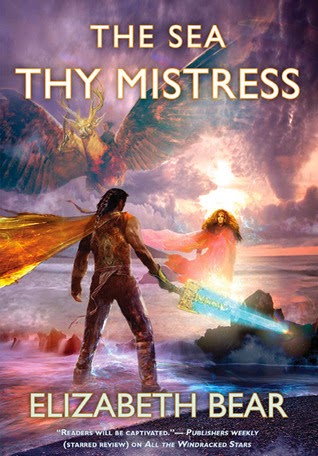 The Sea Thy Mistress, when it comes down to it, is an interesting read.  Unfortunately it takes a bit to get there.  It doesn't help that it deal with a pretty big time span and multiple characters (on that note, I think it gets better when the characters more or less come together later in the book).  All in all, I am glad I persevered through the beginning and finished it and the entire saga.
Posted by Shauna at 1:21 PM

I was reading a few reviews on Goodreads, and I have to agree with Rosa Aquafire's point about the events being seemingly different between All the Windwracked Stars and The Sea Thy Mistress, particularly concerning Muire and Cahey. Nowhere in All the Windwracked Stars did I feel Muire and Cahey had an epic love story. So him grieving that she was gone felt a bit weird. I chalked it up to his grief at losing a number of people all at once (Astrid died, then Muire left rather soon after saving him), so I didn't think that was detrimental. But if you look at it as him just grieving Muire being gone, it does seem a bit weird.

You can read her review here if you're interested: https://www.goodreads.com/review/show/935272020?book_show_action=true&page=1