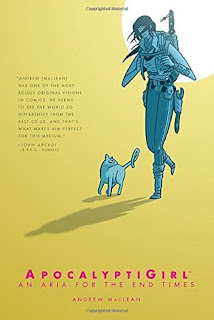 But beyond that, I didn't really get much else. Aria and Jelly Beans are trying to find a powerful relic (and fix up an old mech?) Two groups of people are fighting each other; one of them takes an interest in her after she kills their hunting dogs (in self defence). A third bunch of people caused the world's problems; they show up later for some reason and start blasting. Aria is from a fourth people (I don't know who, or really why they wanted the relic beyond "it is super powerful.") Honestly this was a weird story. With all the exposition Aria gave, I feel like I should've had a better idea of what was going on than I did. The art style was fun though. Although even with that, I had a hard time following a lot of the action.
So yeah, that was Apocalyptigirl.
Posted by Shauna at 1:29 AM