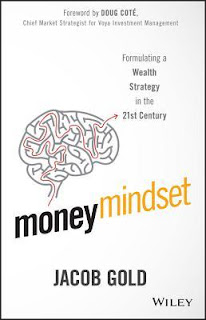 Wow, Money Mindset by Jacob Gold is the fourth nonfiction book I've read so far this year.  I took it out a few weeks ago and didn't have time to sit down and read it.  But then today I noticed someone else had put it on hold so I figured I might as well get to it.  Luckily Money Mindset is a super fast read; I finished it in a few hours.

Money Mindset is Gold's attempt to show readers how to grow their wealth now that the rules that worked in the mid-20th Century are no-longer working.  He specifically wrote it for Gen Xers and Millennials, but hopes that people of all ages and financial savvy will get something out of this book.  Equating money to "financial energy," Gold takes you through a step by step process to help you determine your future money (ie retirement) needs and how to start getting yourself there (with the caveat that it is much better to start saving now rather than waiting until later).

Gold's book is very easy to follow along (which was a good thing because I'm a bit under the weather right now and wasn't sure if I'd be able to focus on it).  I now have a better understanding of the basics of how to grow my money, which is really what I was hoping to get out of this book.  I'm also planning on checking out some of the websites he recommends, like Vanguard's risk tolerance questionnaire.

A major complaint for me is that it is very much an American book.  I do believe that much of what he said is useful for people located elsewhere in the world.  But he only looks at American programs (like the 401 (k) and the IRA).  I realize that Gold is American and writing for an American audience, but for someone not located in the USA, the book was a bit off-putting at times (particularly the appendix, which details the history of energy in the United States - I honestly do not recommend reading that unless you're genuinely interested because it doesn't add a whole lot to the book as a whole and I'm glad he made it into an appendix instead of leaving it as the introduction to the book).