Sun in Glory and Other Tales of Valdemar 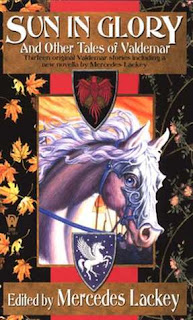 I've had Sun in Glory and Other Tales of Valdemar for years. I loved reading Sword of Ice, which was the first collection, so when I saw this one (and pretty much all of the others in this series), I bought it. But then it sat on my shelf for years (this one was published in 2003 - I have probably had it for pretty much that entire time) along with the other ones.

"Errold's Journey" was written by a 10 year old. I thought it was a great story for someone so young. A group of people fleeing a mage war. They journey far away. A mage storm hits them even there. They make an alliance with newly changed cats and found Errold's Grove.

"The Cat Who Came to Dinner" is about a Vkandis Sun-priest named Reulan. When Reulan is sitting down to eat dinner after lighting the Night Candle, he is joined by a large, cream-coloured cat. Very quickly, the cat becomes his companion, accompanying him everywhere. But after it saves Reulan's life, the mtstery deepens: what exactly is this cat? Of course, I'm very familiar with the world of Valdemar, and knew exactly what was going on with the cat. But this was still an excellent story. :)

"Winter Death" was a long story. A bit hard to get into. But once I did, I loved it! It's the story of Kayla, a woman from the North who lost everything. She is Chosen by her Companion (whom she has long known in dreams) to save the Kingdom from a mysterious illness. I actually wish this had been a full novel rather than just a 50ish page story.

"A Herald's Rescue" is about Santar, a young stableboy who works at his father's stables with his six brothers and one sister. A Companion shows up without a rider and drags Santos off to rescue his Herald. Santor wants to wait to get others to help too, but at the Companion's insistence, Santor goes alone. This was a quick read that I really enjoyed.

"In the Eye of the Beholder" is another short one. But it's a really fun story all the same. Marra's village was burned by a lord named Darick. She manages to escape and makes her way through the woods, trying to find some authority to report the atrocity to. But she discovers she's being followed by someone...or some thing. And when that thing saves her from a monster's attack, she decides she has to help it.

"Trance Tower Garrison" is about the northernmost garrison in Valdemar. The garrison is under siege from an unknown army. They've sent people to warn the capital, but after a month has passed it's unlikely anyone got through. Then the night watch sees a white horse circling the garrison. And the defenders decide to fight their way through the invaders in the hopes of uniting the Companion with its Chosen.

I stopped reading this anthology part way through April of 2015. I finally picked it up again yesterday with the intention of reading one story before going to sleep. "Starhaven." "Starhaven" is about the Herald Vess who returns to the destroyed village of Starhaven in the Pelagir Mountains. He's in the area to investigate a healer girl. But something is not right with her gift... This one started off a bit oddly but it was super good! I really should not have waited like a year and a half to read it!

Of course, after finishing "Starhaven" I just kept going. "Rebirth" is about a Herald mage who gives his life for his queen. As he dies he is given a vision of her soul being destroyed and everyone else in Valdemar being enslaved. So he steals some time to return to her and save her once again. "Rebirth" was just okay. I wasn't super enthralled with the afterlife world. But I did feel like I enjoyed the story in the end. That Herald was willing to give everything to save the woman he loved.

"Brock" is the story of a Herald named Jors who meets a Moonling named Brock who thinks he's also a Herald. The townspeople make fun of him, telling him he can't be a Herald for any number of reasons. But as Jors discovers, not all Heralds wear their Whites on the outside and are Chosen by a Companion. "Brock" is an awesome story by Tanya Huff showing how we all need to look passed a person's appearance.

I have to say, I'm pretty sure I read "Brock" before. The ending, where the Companions always seek him out even though he has never been Chosen was so familiar to me! But I'm not at all sure where I would have read it (it was also published in Tanya Huff's short story collection Finding Magic, but I don't recall reading that).

Anyway, "True Colors" is about Rin, an eighteen-year-old conman impersonating a Herald in the north of Valdemar. When he finds a couple of children on the road being chased by brigands, he is given a choice: save himself, or help them. Choosing to help them changes his life forever. "True Colors" is a cute story (and the ending also seemed rather familiar...).

"Touches the Earth" is a quick story about Anya, a Healer in training who hasn't been able to use her Gift to its full potential. When a girl from her village goes missing, Anya and her teacher go to find her. Their journey of course results in Anya finally surrendering herself to her gift.

"Icebreaker" is the story of Elidor, a Journeyman Scribe. After his family perished in a fire he was sent to the Library at Talastyre. Elidor longed to be Chosen by a Companion. But when a Companion comes and gets Elidor to follow him and help save his Chosen, Elidor realizes that maybe a Herald's life isn't for him; maybe he is exactly where he needs to be.

The final story, "Sun in Glory," is by Mercedes Lackey herself. It was the only one I actually read today. "Sun in Glory" is about the Queen's Own Herald, Talia, becoming a Priestess of Vkandis the Sun Lord. Vkandis is the God worshiped in Karse, Valdemar's bitter enemy. But with the crowning of a new Son of the Sun (who happens to be a woman), Karse is trying to root out the corruption in the ranks of its Sun Priests and reforge old alliances (particularly since together, Valdemar and Karse will be able to stand against a grave threat, but separately they will both perish). So the new Sun of the Son sends her close friend to make an offer of peace between them. Vkandis himself suggested that the Queen's Own Herald be made into one of his Priestesses to actually cement this tie between the two nations. "Sun in Glory" was told from Alberich's point of view, which was interesting but particularly apt. Alberich is one of my favourite characters, a Karsite who becomes a Herald of Valdemar after his Companion smuggles himself into Karse, and then gets Alberich out of Karse. So when the Son of the Sun's envoy approaches Alberich, there's a lot more going on since he may finally be able to go home without being killed as a traitor. I have to agree with many of the other reviewers of this book on Goodreads; I wish this story had been longer (it honestly could have been a full novel in its own right).

But like a few of these other stories later in the collection, "Sun in Glory" seemed so familiar.  So now, having finished reading the anthology, I'm wondering if I've read it before?  I honestly don't remember doing so though.  But whatever, I've definitely read it now!

Sun in Glory was an entertaining enough read.  I don't know why exactly I put it down when I did, since the majority of the remaining stories were really, really good.  Some of the stories in this collection aren't amazing (I'm looking at you, "Rebirth") but overall the collection is pretty solid.  It was wonderful to be back in Valdemar after so long (I haven't actually read anything set in Valdemar since before this blog was created in 2008!)  And I was glad to revisit some of my "old friends" like Alberich in "Sun in Glory" at the very end.  :)