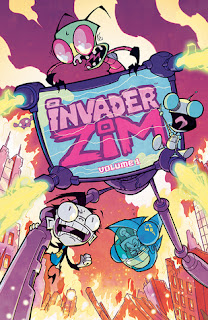 I didn't realize this at the time, but each issue (or chapter in the case of the graphic novel) is a separate story, rather like the cartoon (each cartoon episode had two stories in it).

I think the first story/chapter in Invader Zim: Volume 1 is probably the funniest.  Zim has been hiding in his house (in a toilet) for years, all as part of his nefarious scheme to make Dib fat and useless.  It works, but thanks to a training montage, Dib is back!

Chapter 2 is the second part to that story, where Zim is looking for the Gargantis Array.  After heading to every tacky tourist shop in the galaxy, he eventually finds the lady who will give him the codes.  But Dib isn't far behind (using Tak's ship!)

The remaining three chapters are all standalone stories.  First, Zim creates art installations around town to summon the Star Donkey.  Next, the Tallest send him their trash, telling him it is a super secret weapon that must be protected at all costs.  And finally, Dib unplugs Gaz's game.  She looks for a separate reality where non-gamers are punished for existing to get revenge against her brother (this one is weird, but has some fun game nods to things like Minecraft and the Binding of Isaac).

This is a ridiculous collection of stories in true Zim fashion.  Can't wait to read book 2!
Posted by Shauna at 8:21 PM