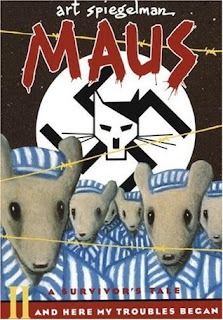 Wow is Maus II a different animal from Maus I.  Maus I leaves off with Anja and Vladek arriving at Auschwitz.  While their journey has been tough, it is nothing compared to what they go through in the concentration camp.  For one thing, they are, for the first time ever, separated.  For another, death is EVERYWHERE around them.  We don't get to know exactly what happened to Anja, only that she survived thanks to Mancie keeping her close.  But we get Vladek's trials in great detail.  How he taught someone English which kept him out of hard labour for a few months.  How he managed to convince people he was a tinsmith or a shoe maker, which helped keep him alive.  How he managed to get food in exchange for other things (and used that food to bribe his superiors so they would do their best to keep him around).  How he got lucky and hid in the bathroom during an inspection when he was sick and would have been killed for sure.  How he was marched out of Auschwitz, left in a train car to die only to survive.  Escaping that train (near the end of the war), he was picked up by more Germans and thought for sure he was going to die before morning; only to wake up and the Germans had run off.  This happened twice.  And how he worked for the Americans near the end of the war before making his way back to Poland and Anja, who was waiting for him there.

On the other side of this story is Vladek's story with Mala.  Mala leaves him, so he calls his son and daughter in law to come and stay with him.  How his health is deteriorating but he refuses to pay for a live-in nurse or enter a retirement home.  His son can't stand being around him for too long and doesn't want Vladek to move in with him and his wife; he keeps hoping that Vladek and Mala will get back together (which they do in the end).  Oh, and how Spiegelman's wife picks up a hitchhiker and Vladek is incredibly angry and racist because the hitchhiker is a black person - both Spiegelman and his wife point out how Vladek of all people shouldn't be racist after his experience (but he says, not in these words, that his experience with black people is why he IS racist towards them).

So yes, Maus II is a very different book than Maus I.  Maus II is a much darker story, which I found much harder to read at times (I had to take a break from reading after Chapter 3 because it was just so heavy).  While they are different books, they are both good in their own way.  I'm glad I finally made the time to read both Maus I and II.  I haven't read much Holocaust literature, but wow did these two books make the experience so human and personal.  They are definitely both worth reading.
Posted by Shauna at 10:50 PM