The Dark Tower: The Drawing of the Three 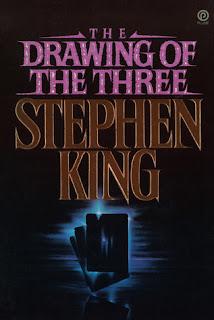 Alright then.  So back in June, I finally read The Gunslinger.  At that time I said I was pretty uninterested in continuing.  But then a friend at work lent me The Drawing of the Three and The Wasteland.  So I guess I get to continue on this ride.  I put off reading The Drawing of the Three for a couple of weeks, but finally just got on with it (it helped to find out that most people either like books 1 and 4, or 2 and 3.  Since I didn't like book 1, by that logic I should be good to go for book 2, right?)

The Drawing of the Three opens with Roland, the last gunslinger, on a beach.  His ammunition has gotten wet in the surf, so he's unsure of what will still work.  He is attacked by a weird lobster monster, which severs and eats two fingers from his right hand and one of his toes.  Roland manages to kill it, then finds the first of three magic doors that open a portal back to our world.  He must go through them and find the three people the man in black told him about at the end of the last book.

The first door leads to Eddie, the Prisoner.  Eddie is a junkie, a prisoner to the demon of his addiction to drugs.  He is smuggling drugs back to New York City.  When Roland enters the door, he arrives in Eddie's mind and is able to control him (or sit back and do nothing).  This chunk of the book was really fun, with Roland trying to figure out how to navigate the world and its strange customs (like the ritual of clearing the customs.  Or the fact that podkins are called "sandwiches" in this strange, amazing world.  Or how about how paper is pretty much disregarded and everywhere?)  Roland sees that the stewardesses (or "army women" as he calls them because they are in pants) are onto Eddie and manages to help him by bringing the drugs back to his world.  After clearing the customs, they go to deliver the drugs to Balazar, which ends in a shootout (but luckily they are able to bring some penicillin back to help Roland, who is badly suffering from an infection).

Next, the second door leads to Odetta and Detta.  Odetta is an intelligent, sweet lady in a wheelchair (she was pushed into the path of an oncoming train years ago, which severed her legs).  Detta is an evil hellion of a woman.  Both happen to inhabit the same body.  Detta is in the process of stealing some cheap costume jewellery when Roland charges in and brings her kicking and screaming into his world.  Eddie starts to fall in love with Odetta, but at any moment she may leave and Detta will return.  It makes for a harrowing journey down the beach to the third door.

The third door leads to a man named Jack Mort. Mort is the cause of so much pain and anguish.  He gets people maimed and killed for fun.  To Roland's horror, he discovers that Jack dropped a brick on a little girl's head years ago, causing her self to splinter into two (becoming Odetta and Detta).  Jack is also the one who pushed Jake, the boy from The Gunslinger, into traffic, which killed him and brought him to Roland's own world.  Meanwhile, back in Roland's world, Eddie (who is exhausted - he's been forced to bring Odetta and Roland to the third door in Odetta's wheelchair because Roland's infection has returned and is once again killing him), has been captured by Detta.  She's using him as bait to draw Roland back into the world they're in - she wants to force the gunslinger to bring her back to her world, or else she's going to kill him.  Roland is in a race against time, having to get the medicine (and new ammunition) before Eddie is killed by the lobster monsters who are on the beach, all while navigating New York City in the body of a monster.

I found the lobster monsters really weird.  They were there as a ticking time bomb, a menace that made life that much more difficult for people.  But it felt super arbitrary.  I mean, Roland could have just as easily lost his fingers to the man in black at the end of The Gunslinger, rather than to these things here.

As for the rest of the book, I was really drawn in (ha ha ha) during the beginning portion with Eddie.  But I lost that a bit once we got to Odetta/Detta.  Detta in particular was a bit hard to read (I mean this literally - there was a page from her perspective that was one crazy long run-on sentence.  It was hard to concentrate on what she was thinking the further into that that I read!)  The book also got really monotonous at that point.  Beach. Walking. Lobster monsters. Repeat.  The Jack Mort stuff was interesting enough, but too similar to the beginning stuff to be really new (I mean Roland as a fish out of water sort of thing).  He also took control and did whatever he had to to get what he needed (he didn't kill any innocent bystanders, but he used Mort to get around, used his brain to find information, and wandered in places to "steal" things - I put steal in brackets because he always paid for them, but he'd go up and terrorize people with guns beforehand because he had to).  But everything turns out alright in the end: Detta and Odetta are reunited, Eddie is saved from lobster monsters, Roland gets to heal, and Jack Mort is dead.

I also need to talk about the references to genitals.  I kept track as I was reading (only because the first page literally had two separate references in it).  There were 32 separate instances.  37 total (Detta would throw around two to three references all the time).  Jerking off got 6 mentions.  I didn't count references to sex (because I honestly didn't really care), but I would guess it was comparable to jerking off. In a book with 400 pages, it's not tons, but it was still enough that I noticed as I read (on average it's a reference per ten pages) and it kind of knocked me out of the narrative because a lot of them didn't seem warranted.  Has anyone else felt like that while reading these books?  Does Stephen King have some preoccupation with (mostly male) genitals?  Or is this just a Dark Tower thing???  I haven't read any of Stephen King's horror novels, so I honestly don't know if this is just a quirk of his writing or not.

I also feel like it is part of the reason these two books have felt more like "guy books" (I felt like that with some of Chuck Wendig's books, too).

So anyway, I liked The Drawing of the Three a lot more than The Gunslinger (I was more interested in the story by a long shot), but I didn't think it was amazing.  I will be reading the third book (because my friend lent it to me), but I'm definitely going to go read something else (or a few something elses) in the immediate future.
Posted by Shauna at 4:35 PM