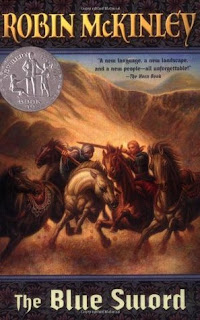 I can't remember exactly why I bought Robin McKinley's The Blue Sword.  I think I got it after reading Uprooted.  I also think I was attracted to The Hero and the Crown, but ended up buying The Blue Sword at the same time because it is the first book in McKinley's Damar series.  I've read one other book by McKinley (Sunshine) and liked it well enough; so I decided to give The Blue Sword a shot when I went out to camp over the weekend.

The Blue Sword is the story of Harry Crewe, an orphan girl who goes to foster with a couple who live on the edge of Damar.  Her brother arranged this for her after their father died.  Harry is kidnapped from their home by Corlath, the Hillfolk King; Corlath laid eyes on her, and his magic (called kelar) insists that he bring the Outland girl with him.  Harry is treated with the utmost courtesy (although due to their cultural differences, some of that courtesy, like the male servants wanting to bathe her, is not appreciated).

Harry begins to learn the ways of the Hillfolk, starting with how to ride like them (they have no stirrups nor bridles, and control their horses completely through their body language).  She then goes into the wilds with Mathin, one of Corlath's 18 King's Riders, to train for six weeks.  When she returns, she enters the Laprun trials (a competition held every three years now to determine whether or not a man or woman is worthy to wear a sash - only sword-bearing citizens can wear one) and places first, becoming the Laprun-minta (she loses only to Corlath, who is the final combatant she must face).  After that, Corlath makes her one of his Riders, giving her the blue sword Gonturan, which was last wielded by Lady Aerin the Dragon-Slayer generations ago.

At this point, the Hillfolk are preparing for war against the Northerners, who have mobilized their gigantic army and are heading through the mountain passes.  Harry and Corlath have a disagreement - Harry thinks they should be concerned about the Northern army splitting into two and going through two passes.  The second pass is by the Outlander settlement which Corlath tried to warn when he first saw Harry; he believes it is their problem.  Under the cover of night, Harry saddles her horse and leaves.  Two of her friends (and the hunting cat which has befriended her) join her.  She amasses a small force which slowly gains numbers when others join her (including her friend the Outland colonel). They arrive at the pass to find that the bulk of the Northern army is planning on crossing the mountains there.  They defend the pass on the first night and Harry manages to knock down the enemy's standard (although she knows she would never have been able to defeat the opposing commander one on one - he was toying with her in their battle and let her live).  Harry goes to the top of a mountain and with the help of Gonturan, manages to bring the mountains down on the pass and the Northern army, crushing them.

Harry then goes back to Corlath (because a whole bunch of her friends urge her to - she was afraid to go because she was afraid of his reaction to her desertion).  Instead she is welcomed back; Corlath declares his love for her.  They are married, have many children, and open up diplomatic negotiations between their two nations.

While I powered through The Blue Sword, I had a bit of a hard time reading it (it was very much a slog to get through).  I liked a lot of the characters, and the book was interesting enough.  But I think unfortunately it was a characteristic of how the book was written - it just didn't work for me, but I'm not entirely sure why not.  I'm a bit worried to read The Hero and the Crown now, but at the very least I should be able to power through it like I did The Blue Sword.

Also: why did Harry only name Colonel Jack Dedham as her Queen's Rider in the end???  Why didn't she name Senay and Terim, too?  They were the two friends who went with her from Corlath's camp to defend the second passage - don't they deserve the same honour as Jack?
Posted by Shauna at 9:40 PM