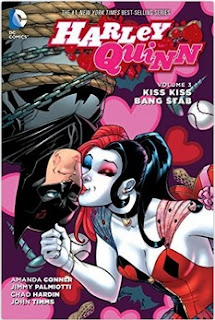 Over the last few months, I read all of the Harley Quinn graphic novels I could get my hands on.  I didn't mark them down on Goodreads because I didn't feel like using them for my reading challenge.  But I thought I should say something about them on here.

I started with the three Harley Quinn rebirth volumes that are out so far (#4 comes out in January).  I think that was back in September when I started them.  Then when I finished those, I started in on the series that came before Rebirth (which had six volumes). Most of the volumes are available on Hoopla, so I read them there.  But two of them weren't; luckily I was able to get them from the library.

I don't remember why exactly I started reading these, but I really enjoyed them.  Harley herself has a heart of gold - she's just a bit misguided in her means.  These stories also aren't your typical super-hero stories: she does kill people without remorse when they break her code.

I really liked the Rebirth series....but it was a little confusing at first because she's already got all her friends and her building and her Gang of Harleys.  So it was good to go back and read the series before Rebirth because it explained everything that happened to get her to that point.  I'm really looking forward to the next volume in the new year. :)