Sword of the Rightful King 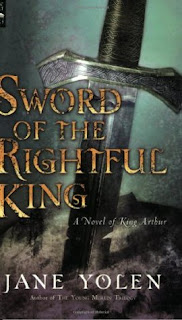 I was pretty excited to read Jane Yolen's Sword of the Rightful King. The synopsis sells the book as a sort of alternate history of the King Arthur Legend: the mage, Merlinnus, creates the sword in the stone as a test for Arthur, who is already High King of Britain.  But someone else pulls the sword from the stone!!! While that is, in the end, what does happen, this book is very much NOT an alternative history of the story.

What happens is that Gawaine is summoned to his mother's (Morgause) chambers.  She tries to persuade him to stay home and rule as king of the north, but he refuses; he wants to return to Arthur and Cadbury (Camelot).  So she sends some of his brothers with him (just not the youngest).

I'm going to note here that Gawaine seemed like the main character.  But after this beginning stuff, the narrative largely moved away from him, which was rather disappointing.

Meanwhile, a boy named Gawen also shows up at Arthur's court.  Gawen wants to be trained as a knight, but ends up being told to study with Merlinnus.  It's around here that Merlinnus also has the idea to create the Sword in the Stone as a test for Arthur and a means to unite all of Britain under his rule.  The narrative largely switches to follow Gawen from here rather than Gawaine (and it's a bit confusing because their names are so very similar).

Morgause finds out about this test and conspires to get one of her sons to pull it instead. She shows up at Cadbury to try to work some magic on it; that fails, thanks to Merlinnus and Gawen working on a protection spell.  Then she bespells almost the entire court, and attempts to make Arthur fall in love with her.  Thankfully for all, her scheme is discovered by Gawen, and she leaves.

Then at Midsummer's Eve, when magic is supposed to be most potent, everyone attempts to pull the sword from the stone.  Arthur is the one who succeeds, so everyone is happy.  But he confronts Merlinnus later to tell him that it is a different sword he pulled from the stone. It turns out that Gawen managed to pull it out by melting butter and getting the sword to slide out (this was disappointingly not shown to us, the reader - all we knew was that Gawen went to the kitchen and *did something*); Gawen replaced the sword with another one for some reason.  Arthur claims Gawen is now king, but Gawen reveals that she is in fact a woman and so cannot be king.  Arthur then decides to marry her, making them both High King and Queen of Britain (and uniting the two people who have pulled swords from the stone).

For the most part, this was a fine retelling of the King Arthur myth.  But by leaving out till the very end the fact that someone else did pull the sword from the stone, I felt cheated by the story thanks to the synopsis making me think someone else pulling the sword was the actual main plot point that would get the story going.  The whole sword in the stone took way too long to get going in the book as well, making me sort of lose interest halfway through.  Same with the way the book started with Gawaine and then abandoned his narrative - that actually made me feel cheated as well.

On the plus side though, Yolen has a fine writing style that was easy to read.  I think if the synopsis had been better (and not sort of misleading), I would have been a lot happier reading this book.
Posted by Shauna at 4:25 PM