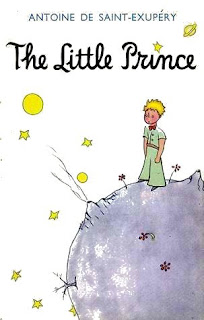 My brother read The Little Prince not too long ago and really liked it.  He was recommending that I read it.  I wasn't planning on reading it quite yet, but then I was in the middle of a nonfiction book, Hustle: the Power to Charge Your Life with Money, Meaning, and Momentum, when a chapter opened with talk of The Little Prince.  I stopped reading Hustle that night and went looking for The Little Prince.  I considered getting it from the library the next day, but lucked out and found it on Hoopla (added bonus - I was able to snag it before the library hit their daily lending limit on Hoopla!)

The Little Prince takes place in the desert when a pilot crashes and meets the titular little prince.  Over eight days, while the pilot tried to fix his plane, the two talk.  The pilot slowly learns where the little prince came from, and more importantly, the why.

I'm honestly not very sure how I feel about this book (I finished it four days ago and still haven't given it a rating on Goodreads).  I liked some parts of it, but I had a hard time connecting with the story as a whole.  I do wonder if maybe I need to try reading a different version?  If I just couldn't connect with the translator in the version I read?  I know I was having problems with grammar errors in the Hoopla version.  Or otherwise if I just need to reread it?  Well, whatever it was, I think I will ask my brother if I can borrow his copy and give The Little Prince another shot at some point in the future.
Posted by Shauna at 1:59 AM