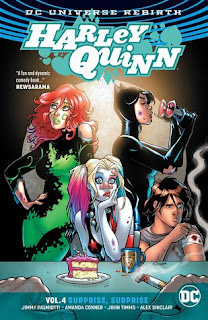 My local library will no longer be subscribing to Hoopla. :(  Hoopla was where I read the majority of the Harley Quinn series last year.  With service ending, I decided to download Rebirth volumes 4-6 and binge through them before the end of the year.  Unfortunately I didn't realize there was one more volume I could have downloaded (they changed the numbering on the series so the newest graphic novel is "Volume 1" but it collects Harley Quinn issues 43-49; I used my last Hoopla download for a random other book before I realized what had happened). 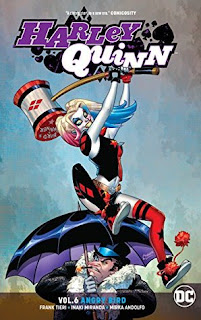 So Volume 4 starts off with a visit from Harley's parents.  Things of course go wrong, but her parents end up really cool people who support her and are proud of her.  Then in Volume 5, Harley decides to finally take on the mayor of New York City by hitting him where it really hurts: she runs for election opposite him!  And what makes it all the more infuriating, pretty much every time she does something the city of New York loves her for it!  Then in Volume 6, Harley is dealing with the aftermath of the election (she lost someone she really cares about) and just wants to be left alone so her friends aren't put into more danger from her being around.  Unfortunately the Penguin takes that opportunity to invite many of the Gotham super villains to Coney Island in an attempt to take over!

I really enjoyed reading Harley's adventures again, and I'm sad that the library hasn't been getting these graphic novels outside of Hoopla.  :(
Posted by Shauna at 2:07 PM