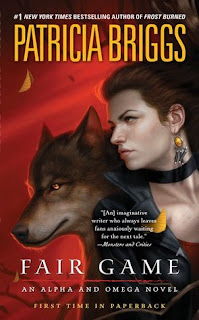 Fair Game takes place quite some time after Hunting Ground.  Werewolves have outed themselves to the world.  The Marrock Bran has tightened werewolf law; where once young wolves may have gotten a warning, now they are executed if they break that law.  And Charles is the one who gets to do the honours.  He's been sent out as his father's executioner for about a year now.  And the job is killing him.

Luckily for Charles, he is mated to Anna.  Anna knows what is happening because Charles has stopped playing music and has shut down the bond between them.  She goes to the Marrock, who doesn't listen to her.  So then she gets Asil to help her.  It is Asil who finally gets through to Bran that Charles needs to do something else to get his mind off of all the killings he has had to do for the pack.

Luckily an opportunity comes up that is perfect: there is a serial killer loose in Boston, and the FBI want a werewolf to help them find the culprit.  Bran sends Anna to consult with them, with Charles as her bodyguard.  They discover that the victims have largely been half-blooded fae, along with a few werewolves thrown in since the werewolves have gone public.  Unfortunately for Anna and Charles, helping the FBI puts them on the killer's hit list.

I loved this book.  Reading about Anna and Charles felt like going back to visit old friends.  Fair Game was also a bit of a departure from the way Anna and Charles are in earlier novels though: Anna is in many ways the stronger one here, while Charles is the weaker one (ghosts from his executions are literally haunting him, and he is terrified they will hurt Anna so he has shut the bond down between them to protect her, even though that is hurting her terribly).  I loved the change in Anna in particular because she has grown into herself now, refusing to be anyone's victim (she even says that Charles teaching her to protect herself is the best gift he ever gave her; that he is still willing to come and help her/protect her is the second best).  And seeing Charles truly vulnerable to something was refreshing (and how the power of love literally does save him, because fearing for Anna's life helps him break through the stranglehold the ghosts have on him).

This was the first book though that I felt might have benefited from me reading more from the Mercy Thompson series (which I haven't read since 2009).  A lot of time passes between Hunting Ground and Fair Game and there's even reference to things that have happened to Mercy that I really feel like I should have read first.  But really, it's not a huge deal - those references are only made in the first chapter or so, then Fair Game goes onto its own path.

The characters were also a little hard to follow.  Anna and Charles meet six people initially in Boston: two FBI, two Homeland Security, and two agents from CANTRIP (the agency dealing with supernaturals), then a Fae.  Outside of the two FBI characters, who are around through the whole book, I had a hard time keeping all of the other characters straight, especially since I don't really think the Homeland Security ones show up again (so I kept second guessing myself with names and wondering who was who).  By the end of the book I was fine, but the middle got a bit confusing trying to keep everyone straight.

But like I said, I really did love this book.  I'm glad the series has continued (book 5 was published in 2018) so I'll be able to read more adventures of Anna and Charles in the future. :)
Posted by Shauna at 1:39 AM

I'm also interested to see what happens now that the Fae have declared themselves separate from humans in the United States. I really should get back to the Mercy Thompson books soon to see what comes of that because I'm sure it will have ramifications there, too. Unfortunately that will involve rereading the first three books, which I'm not planning to do at this time...