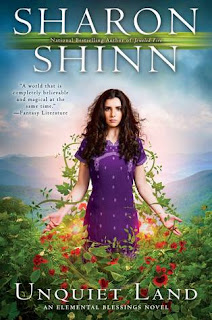 Well, here we are: Unquiet Land, the last book in Sharon Shinn's Elemental Blessings series. I brought it out to camp with me over the long weekend, starting it on Saturday night, bringing it out to the dock with me on Sunday, and finishing it Sunday night (or more accurately, Monday morning around 3am). I've been super excited to read it because overall I've really enjoyed Shinn's Elemental Blessings, but I was also a bit sad to be reading it because this is it.

Unquiet Land follows Leah, who was working in Malinqua as a spy for Darien Serlast; she helped Corene out a fair bit in that city. At the end of Jeweled Fire, she agreed to go home to Welce.  She decided that after five years of running, it's time she tries to be a mother to her daughter, Mally (who in Royal Airs was the decoy princess because she looked so much like Odelia, but now that Odelia was determined to be unfit to rule, Mally is free to be herself).

After arriving in Welce to restart her life, she is approached by Darien Serlast, who wants her to open a shop in the hopes of attracting some foreign visitors.  While in Malinqua, Leah had been working at a booth in the Great Market with Chandran, so she has some experience with this sort of thing (and determined that she actually has a talent, both for choosing wares to sell, and for selling to wealthy clients).  With his wife, Zoe Lalindar, and Zoe's best friend Annova, and some help from Chandran from afar, Leah puts the shop together in record time. She is also surprised by Chandran, who has followed her to Welce.  He shares a secret with her that leads her to keep him at arms length for a bit while she considers it, but over time (and through working with Annova at the shop), they become closer.

Leah also slowly grows closer to her daughter.  At five years old, Leah doesn't know quite how to tell Mally that they belong together.  But with the help of her friends, she spends more and more time with Mally and grows closer to her.  I actually really liked this aspect of the story; it would be very hard to grow closer to a child whom you've never met (and very hard to find the right moment to tell them that you are their mother).

The story took a couple of weird twists near the end.  Leah does manage to befriend one of the foreign people Darien wanted her to learn information about.  These foreigners are people of extremes: they will do works of great charity in order to do things of great sin. Their country was annexed some time ago by another one, so they are in Welce trying to gain an alliance.  Because Darien doesn't want an alliance with them, he has been holding them off, telling them he has to speak with the primes.  The prince believes that Darien is therefore weak, or else that he is not actually going to be crowned king instead of Odelia (Odelia is a blood heir of the last king, and therefore the only one who should wear the crown in his opinion).  Unfortunately, his people have encountered Mally, who still introduces herself as Odelia (as she had to as the decoy princess).  Believing they have found the true heir, they kidnap her in the hopes of securing the alliance they seek.

This was a weird turn in the story in my opinion.  I was expecting them to kidnap Celia, Darien and Zoe's daughter.  But whatever.

Darien and company go chasing after the kidnappers to head them off before they board ships and leave the country.  Their plan is to offer Chandran in exchange for Mally; Chandran believes they will accept this because he greatly wronged the prince's family in the past.  Leah is heartbroken because she wants both Mally and Chandran to be safe.  An unexpected twist sees Mally freed: Leah's friend among the foreigners realized Mally was Leah's daughter and stole her away from the others to give her back.  And when enemy soldiers try to stop them, Mally literally moves mountains to save them, revealing herself as the heir to the torz prime.  It was very climatic, but in a lot of ways not entirely fitting with the rest of the book.

Overall though, I did enjoy Unquiet Land.  As a story about a woman trying to navigate her way among family (and in many ways building her own family), it's wonderful.  I actually really loved how Mally's father explained things to Leah, too - he called them a family and she disagreed (she wants nothing to do with him because he broke her heart, but she has to see him because he is Mally's father).  He countered by saying that they're not a household, but they're still a family. That's such a great sentiment because it is so true: once you have a child together, you are connected, even if you're not living in the same house.

I also liked how Lean and Chandran navigated the way through their relationship in the aftermath of Chandran sharing his great secret with her.  They kept trying to stay apart so Leah could consider things (especially whether or not she could trust Chandran around her daughter).  But slowly they grow closer while working in the shop together (plus one of the primes endorses Chandran to Leah, saying he's a good man).

Even though it is the first book not to deal specifically with the princesses (or Zoe who was supposed to marry the king), Unquiet Land is a good addition to the Elemental Blessings series. I just wish it wasn't the last one - I would love to read more about Shinn's fantastic characters and setting!