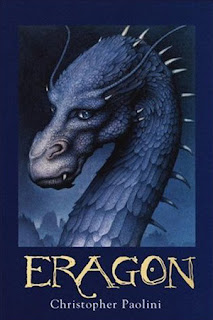 I originally read Christopher Paolini's Eragon when it first came out, before the second book, Eldest, was even published.  At a guess, this was sometime in 2005, a few years before I started this blog.  So unfortunately I don't remember what exactly I thought of it (although I remember liking it well enough).  It was recommended to me at the time by a friend (we went to see the movie together, too).  I bought Eldest when it first came out, too, but decided not to read it because I knew the series was supposed to be a trilogy; at that time I decided I wanted to wait until book three came out before continuing on.  Then book three was split into two (much like what happened with Bruce Coville's Unicorn Chronicles; that seemed to be a trend in books at the time).  And since the books are so big (book 1 is about 500 pages), it was really hard to get myself to go back to them, especially knowing that I had to reread Eragon before getting to the newer books.  But thanks to the global pandemic that's happening right now, this seemed like a good time to actually go back and reread it.

Eragon is the story of a farm boy (? it's a weird distinction because he's first portrayed as a hunter) who finds a dragon egg.  The egg hatches, and he finds himself suddenly thrust into the larger world with enemies everywhere fighting to control him.  His only help is the storyteller, Brom, an older man who lived in Eragon's little village but has many secrets of his own.  Together the two of them head out on a quest of vengeance, with Brom doing everything he can to prepare Eragon for the larger world in which he's suddenly part of.

In a lot of ways, Eragon is very much the typical "boy from nowhere is actually the chosen one" kind of tale.  I'd even go so far as to say Eragon himself is a Mary Sue kind of character (his sword fighting progresses over a couple of months so he's now one of the best human sword fighters around! He's the youngest Dragon Riders to start using magic!  He learns to read in a week! He's destined for a great romance!  That sort of thing - I suspect he's also of noble birth...my guess is actually the second and unknown son of the King's second in command.  We'll see if I'm right).  He's also one of the most whiny teenagers imaginable.  Through the first half of the book he's honestly pretty unlikable (although I don't blame him from some of his frustrations - Brom in particular doesn't tell him things pretty much "just because" and it's annoying from a reading standpoint).

While I don't remember my thoughts on the book the first time around, I'm pretty sure Eragon annoyed me back then, too. Thankfully he's surrounded by far more interesting characters.  Saphira, the dragon, is a lot of fun.  Although she is much younger than Eragon, she's infinitely more wiser; plus she has a great sense of humour.  I also really liked Brom (outside of his "not telling you things just because" thing); he's a fun character who has no problem with gently making fun of Eragon so he learns.  (Now I don't know if it's because I read the book years ago and kind of remembered Brom's story, or if the writing was just super predictable, but I did know a lot of what Brom was keeping hidden - but that didn't detract from the story at all).  Murtagh, the random swordsman who helps Eragon and Brom and later becomes close friends with Eragon, is likewise a very intriguing character with a great backstory (I also loved his reasoning for refusing to submit to anyone entering his mind: "My mind is the one sanctuary that has not been stolen from me. Men have tried to breach it before, but I've learned to defend it vigorously, for I am safe with my innermost thoughts. You have asked for the one thing I cannot give, least of all to those two" (405)).  I would love to follow his story far more than Eragon's!

The other character of note is the elf, Arya.  She's most likely the great love interest.  I don't have much of an opinion on her at this point though since she hasn't done much but be rescued by Eragon and company, test Eragon's battle prowess, and help in the final battle of the book (which honestly ended up a bit weird - she stayed to get Saphira's damaged armor off while Eragon ran ahead....shouldn't Eragon have helped HIS dragon while the super powerful elf goes ahead?  Also, he kind of steals her kill (the shade) - she demanded it because of what he did to her).  I'm hoping she'll prove to be more interesting in the later books...

I also found the books villain, the Shade Durza, rather interesting as well (although he's not in it all that much).  He actually goes hand in hand with the really cool worldbuilding Paolini did for this book: the villains.  The main world has the typical elves, dwarves, dragons and men.  But the bad guys have shades (sorcerers who accidentally let spirits take over their bodies and become evil), a Dragon Rider who went mad after his dragon died (and took down the whole Order, declaring himself King/Emperor), the Ra'zac (who make me think of Skeksis), and the Urgals (who I suspect are just Orcs, but it still gives the world its own flavour).  Some very cool stuff going on here.

So while the first half of the book is kind of hard to get into (again, thanks to Eragon being a whiny kid who's inexplicably good at everything), by the end I did enjoy the story (thanks in large part to all the other characters).  Hopefully the momentum built up in the second half of Eragon carries through to book 2!
Posted by Shauna at 2:09 AM