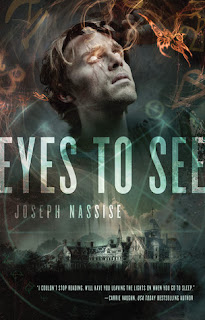 This is a bit embarrassing (yet also somewhat par for the course for me, unfortunately) - years ago, I read (and loved) Eyes to See by Joseph Nassise.  At that time I couldn't wait to get my hands on book 2 in the trilogy.  But then for whatever reason, I just never actually read it.  I've taken the trilogy out periodically from the local library, but never read more than book 1.  I think as the years passed it was harder and harder to go back because I didn't really remember Eyes to See anymore.

So a few days ago, I decided I was going to remedy that.  I once again took the trilogy out from the library (super glad they're all still available!) and actually started rereading Eyes to See.  A large part of this decision came from me feeling like reading something I actually want to read, not something I feel like I HAVE to read (which just seems to keep happening in life).

It was very interesting going back to it, six years later.  I only remembered some of the vague story beats.  I remembered Jeremiah Hunt, and how he had given up his eyesight to find his daughter, which ushered him into a supernatural world.  I remembered the ghostsm Scream and Whisper (but not necessarily their names).  And I vaguely remembered that Hunt found her by the end, and was on the run from something by the end of the book; that was about it.

What I didn't remember was the actual goings-on.  Hunt gets called in by Detective Stanton to investigate a murder scene.  Stanton thinks Hunt is a psychic, and Hunt has no intention of telling Stanton otherwise.  The murder is a gruesome one, and the murderer left writing in several dead languages on the walls.  As an ex-professor who specialized in dead languages, the writing in particular intrigues Hunt, but so does a familiar-seeming charm he finds at the crime scene.  When a second body is found with the same writing (and yet another charm, which Hunt realizes came from a charm bracelet that his daughter had), he realizes this may be the lead he has been searching for over these five long years to finally find her!

The world that Nassise built, especially around the ghosts, is still so interesting.  I liked the first encounter where Hunt is hired to exorcise a ghost from an apartment building, and Hunt goes through all the levels of ghosts that he's encountered (and how this particular ghost hid its true nature).  I actually would have liked to see a bit more of that sort of thing, but oh well, the story is still good without it.

This time around, I admit that I had a harder time getting into it though.  I'm not entirely sure why....but I suspect that it had to do with Hunt being on his own.  I know that the first time I read Eyes to See, I didn't really like some of the interactions between Hunt and the other characters; this time, I actually preferred those moments over Hunt being on his own.  I really liked Dimitri, and loved Stanton - he was the perfect foil to Hunt (and I loved how once he saw real evidence of the supernatural in terms of the fetch, he was all on board with stopping it because he knew it was dangerous).  I think I liked Denise more this time around too - the hedge witch was a very capable woman on her own.

I'm once again excited to read book 2; this time I'm actually going to read it, too! ;)