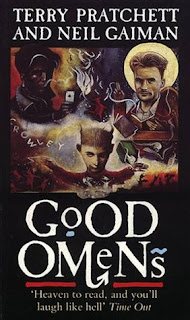 I first read Good Omens by Neil Gaiman and Terry Pratchett years ago (before I started this blog - I'm guessing the early 2000's).  I don't remember much about it except that I really enjoyed it (I was actually talking to my mom earlier today and she said I tried to get her to read it.  I don't remember that, but it's a testament to how much I liked the book if I tried to get her to read it, especially since it isn't remotely her kind of book).

So a friend of mine suggested that a group of us read it as a sort of book club book.  Since we're not able to see each other right now thanks to the pandemic, she thought a book club on Goodreads would be a great way to hang out, so to speak.  She suggested either Good Omens or another book; consensus was Good Omens (even by the people like me who would be rereading it).

So Good Omens is the story of the Antichrist, Adam Young.  He is mistakenly given to the wrong parents and grows up largely left alone in rural England (while the boy who Heaven and Hell thinks is the Antichrist grows up being tutored by their agents, who hope to sway him onto their sides).  It features a large and eclectic cast of characters, from the angel Aziraphale and the demon Crowley, to the three kids in Adam's gang (Pepper, Brian, and Wensleydale - the Them), the four horsemen of the apocalypse (War, Famine, Pollution and Death; Pollution replaced Pestilence, who retired when penicillin was invented), Anathema Device, the descendant of Agnes Nutter (a renowned witch who actually got the future right in her prophecies), a couple of witchhunters (Shadwell and Newton Pulsifer of the Witchfinder Army), and a medium (Madame Tracy - she's Shadwell's neighbour), who are almost all flailing about trying to stop the end of the world.

While I liked Good Omens the first time I read it....I honestly wasn't a huge fan this second time around.  It took me over 70 pages before I felt like things were actually getting interesting enough to continue.  I caught myself wondering around page 200 or so how there could possibly be another almost 200 pages in the story.  With the huge cast of characters, I found I only really enjoyed a few of them (mostly Aziraphale and Crowley, but more-so when they were together; there was a chunk in the middle of the book where they largely disappeared and that felt like a slog).

With that being said though, I actually enjoyed the ending once I finally got there.  Having Adam's friends defeat the horsemen, and Newton halting nuclear Armageddon by attempting to "fix" the machine (because he breaks everything he tries to fix) was pretty great.

But overall, this felt like a book I should have left alone.  I would have preferred to have remembered Good Omens being great (even without actually remembering it in any detail), rather than now living with the fact that it isn't as good as I remember it being. :(

Oh, but one interesting side note on rereading it: when I first read it all those years ago, a friend of mine mentioned that it was really obvious whether Pratchett or Gaiman was writing a given part.  I hadn't yet read anything by Pratchett, so at that time I didn't notice this at all.  Going back to it now though, oh yeah, it seemed really obvious (particularly in the first half of the book - basically the really crazy stuff just felt more like Pratchett, as it were).
Posted by Shauna at 1:25 AM