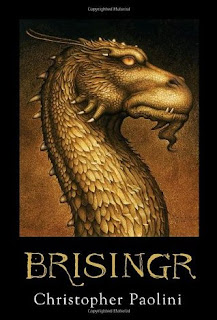 The story picks up not long after Eldest.  Roran, Eragon, and Saphira assault Helgrind to rescue Katrina and get their revenge against the Ra'zac.  The plan succeeds, but Eragon discovers a slight hitch: Sloan. Katrina's father who was responsible for letting the Ra'zac invade Carvarhall and kidnap Katrina, is still alive there, too.  Eragon makes a hasty decision to send Katrina and Roran back to the Varden with Saphira (without telling them that Sloan is still alive), then to get the butcher out of Helgrind and punish him in some way.  He accidentally discovers Sloan's true name, and ends up sending him to the elves, cursing him to never again lay eyes on his daughter.

With that accomplished, Eragon then needs to run through the Empire back to the Varden.  On hearing that he stayed behind, Nasuada sends Arya to go help him.  And so after finding one another, they spend a whole bunch of time running through the Empire together and otherwise dodging imperial soldiers.

Upon making it back, and swearing he will not leave Saphira again, Nasuada orders Eragon to go the the dwarves alone.  The dwarves are choosing their new king, and as an adopted member of one of the dwarf tribes, Eragon has the right to be there.  Nasuada wants Eragon to try to get Orik on the throne or, failing that, someone else who will remain sympathetic to the Varden.  While she cannot order Saphira to do anything, she requests that the dragon remain to keep up the ruse that Eragon is still with the Varden.  The two reluctantly agree to the separation.

Meanwhile, Eragon's cousin, Roran, marries Katrina (it's a hasty thing so they can keep Katrina's honour intact as she very quickly becomes pregnant upon her rescue - this happens just before Eragon leaves, so he gets to be present, too).  Afterwards Nasuada sends Roran on missions under the Varden's command to assess his skills (and whether or not she can entrust her people under him).  Roran excels under his first commander, but runs into trouble with his second one: the man is ridiculously rigid, and Roran ends up defying direct orders from the captain in order to keep his men alive).  As a result, Nasuada is forced to punish him (even though he kept her people alive and single-handedly slew almost 200 soldiers); he receives 50 lashes, but almost immediately is then given command of his own company of men, reporting directly to Nasuada (in her words, she cannot risk him defying orders again, but she knows he can inspire people and will be valuable to the Varden).  He's also given command of Urgals; someone within the Varden had taken it upon himself to kill three of the Urgals, so Nasuada needed the two races to work together (and thought Roran would have the best chance of keeping the peace as leader).  One of the Urgals challenges Roran for leadership and, despite the Urgal having more natural weapons (horns and claw-like fingernails) and Roran still recovering from the lashes, Roran manages to best the Urgal.

Meanwhile, after Orik wins the vote and is crowned king of the dwarves, Eragon and Saphira (who joined Eragon for the coronation and to mend the star sapphire she and Arya broke during Eragon's fight with the shade, Durza), fly to Ellesmera to talk with their teachers, Glaedr and Oromis.  They learn the truths of Galbatorix and Murtagh's power (they have many dragons' heart of hearts (Eldunari), an organ that a dragon can hide its consciousness in and so live if its body is destroyed), as well as Eragon's own parentage (he is the son of Brom, not Morzan).  Eragon is in need of a weapon, and so, remembering the werecat Solembum's advice, they go looking for a weapon under the roots of the Menoa tree (a tree that an elf joined her consciousness to many years ago).  They discover that at the tree's roots isn't a weapon per se, but the metal used to craft the Dragon Riders' swords.  They convince the tree to give it to them (although they make an unknown promise to give the tree something in return), then bring the metal to the smith, Rhunon.  While she has sworn an oath not to make another sword, she instead uses Eragon and makes the sword through him.  Although they are super pressed for time, the two of them craft her masterpiece: a beautiful blue sword that matches Saphira; Eragon christens the sword Brisingr (and every time he says the word, the sword's blade bursts into flame).

As they are about to part from Ellesmera, Oromis and Glaedr gift Saphira and Eragon with Glaedr's Eldunari.  To Eragon and Saphira's surprise, Glaedr and Oromis also ride to battle, but rather than joining the Varden, they fly to support the elves.  Eragon and Saphira fly south and find the Varden already sieging the city of Feinster.  They join the fray and make their way to the city's keep with Arya to confront the Lady Lorana.  To their surprise, the woman is willing to help them as much as she can (she was forced to swear oaths to Galbatorix, and so cannot do much herself).  She urges them to stop a trio of spellcasters who are frantically trying to make another shade.  They slay two of them, but the third spellcaster is successful.  But with Eragon and Saphira's help, Arya manages to slay this new shade (making her the fourth person to ever kill a shade and survive by Eragon's reckoning).

During this confrontation, Eragon and Saphira are periodically immobilized by thoughts and feelings from Glaedr as he and Oromis confront Murtagh and Thorn.  Suddenly, Galbatorix speaks to them through Murtagh, and slays them.  Glaedr finds himself trapped within his Eldunari with his grief over losing his life partner.

I remember years ago, when I was waiting for Brisingr to be published, that Christopher Paolini was on record saying that the story was too big to fit into one book, and so needed to be split into two.  While I have not yet read Inheritance, having read Brisingr, I can say that is most likely not true.  While yes, a lot does happen in Brisingr, there's a lot of padding to the story.  Eragon (and Arya) running through the Empire went on far longer than it needed to.  There was even a whole chapter where they sat around a fire and Arya talked about her life (and while it could have been interesting, it dragged and really wasn't).  That's followed by Eragon running off to the dwarves almost immediately (yawn, been there, done that already). There were a few chapters from Saphira's perspective (which hasn't happened before); while kind of interesting to see how Saphira views the world, they didn't actually add anything to the story (and we later get those flashes from Glaedr once he gives up his Eldunari to Saphira and Eragon which would have given the same glimpse into dragon life in a much more meaningful context). And a whole lot of stuff happening that just doesn't feel very important; not a good feeling for a reader to get when your characters are literally embroiled in a world war. :/

I was also sad that the Ra'zac are no more.  The fight happened early in the book and felt too easy; plus the story was robbed of their menacing presence.  They would have been a more worthy end fight for the book than some random shade shoved into the last 20 pages.

But while a huge chunk of the book was slow and boring, there were some really cool things in it.  I loved the political stuff with the dwarves and actually wished there had been more of that (seeing how Orik and company tried to get votes would have been quite interesting).  Orik's speech telling the other clan leaders about the assassination attempt on Eragon's life and getting the clan responsible banished was masterful.  Orik was definitely my favourite character in this book.

While yes, the villain of this book was random, having Eragon and Saphira trying to fight the shade while also getting distracted by Glaedr and Oromis was well done (and made the shade fight have a bit more weight - would they actually be able to vanquish this one or would the distractions get them killed?)

So while I had some major issues with this book through a lot of it, and was seriously contemplating either stopping part way through or not finishing the series, I'm now on board to see how this all ends.  Hopefully Inheritance will be a satisfying conclusion to the Inheritance Cycle!
Posted by Shauna at 2:18 AM