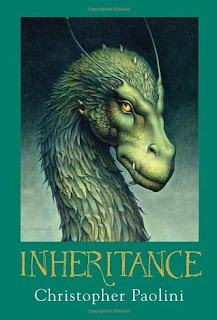 Well, here we are: Inheritance, the final book in Christopher Paolini's Inheritance Cycle.  After Brisingr, I was seriously considering not continuing with the series.  But a friend of mine who has read the series told me I had to finish it now that I made it this far.  So I did (despite the book being about 850 pages).

This is going to be very spoilery, so if you intend to read the series, be warned.

Inheritance continues the Varden's inexorable march towards Galbatorix in Uru'Baen, conquering cities as they go.  After conquering Belatona (where Roran almost dies), they are halted at Dras-Leona by the appearance of Murtagh and Thorn.  Eragon, Arya, Angela and one of the elves sneak into the tunnels beneath the city to try to get the Varden through the gates; Arya and Eragon are very nearly killed by the cult of Hellgrind who worships the Rez'ac and Lethrblaka (and happens to have some eggs that are ready to hatch).  Angela rescues them and they succeed in opening the gates, but Eragon loses the belt of Beloth the Wise (a gift from Oromis). The Varden are able to drive off Thorn and Murtagh, but the duo return and kidnap Nasuada, leaving Eragon to lead the Varden without her.

In desperation, Eragon and Saphira end up taking Glaedr and journeying to Vroengard in an attempt to solve the remainder of Solembum's riddle.  There they find more than they could have ever hoped for: Eldunari that were hidden from Galbatorix, as well as dragon eggs!  Leaving a few Eldunari behind with the eggs (and agreeing to having the knowledge of the eggs removed from their memories until such time as Galbatorix is defeated), the trio return to the Varden to begin the assault on Uru'Baen.  Eragon comes up with a daring plan: he will take Saphira, Elva, Arya, the Eldunari, and the elf spellcasters, sneak in, and assault Galbatorix while the remainder of the Varden, along with their allies, provide a distraction by attacking the city proper.

Making it through all the traps (and losing the elf spellcasters in the process - they weren't killed but removed from play by one of Galbatorix's traps), Eragon, Saphira, Elva, Arya, and the Eldunari confront Galbatorix, who knows all about them (and even prevents Elva from speaking so he will not have to worry about the witch-child's powers).  Galbatorix has found the Name of the Ancient Language, and so can rewrite the laws of magic as he chooses (effectively crippling Eragon and company).  He also has two children present who he threatens to kill if the allies do not immediately stop and cease any attempt to kill him (while many of the older Eldunari do not care, the others want to try to save the children if they can, and so convince everyone to cease).  Eragon challenges Galbatorix to direct combat; Galbatorix declines but insists that Eragon fight Murtagh.  As the fight ends in his defeat, Murtagh realizes that his true name has changed (because he now cares about others, not just his own survival) and he's able to blindside Galbatorix by also using that Name.  In the ensuing struggle, Galbatorix corners Eragon within his mind and attempts to crush him into submission; in a desperate move, Eragon just wants Galbatorix to feel all the pain and suffering he has inflicted on everyone over the last century.  Aided by the Eldunari (many of whom lost their riders and friends in the battle against Galbatorix and the Forsworn a century ago), they succeed in vanquishing the mad-king.

In the aftermath, Nasuada is crowned queen and seeks to unite the humans within Algaesia.  She intends to police the magicians and wants Eragon to lead in that effort.  But Eragon knows his first commitment is to the dragons and the new riders who will now emerge.  He and Saphira realize that Algaesia is not the place for the dragons to live though, and so, fulfilling Angela's prophecy from when she told his fortune, the pair agrees to leave the continent (possibly forever) in order to keep everyone safe.  But before they go, they change the magic of the dragons so that Urgals and Dwarves can also become Dragon Riders, thereby making the new future Riders truly of all the races of Algaesia.

I glossed over a bunch of things that happened, like the third egg Galbatorix had hatching for Arya (this was in the aftermath - her mother died in the last battle, so Arya ends up both Queen of the Elves and a Dragon Rider) and Nasuada's torture by Galbatorix as he tried to get her oath of fealty (as well as growing friendship with Murtagh).

I'm not going to lie: I really liked Inheritance.  It was by far the best book in the whole series, and honestly was a fitting end (although I do find myself curious about what happened to everyone afterwards).  While, as I already mentioned, the book is huge, the first 700-750 pages just flew by (the last bit didn't though because that was all the aftermath after Galbatorix was defeated; the book built very nicely to that, but kind of lagged afterwards, much in the way the story of the first Bioshock game does).  This was in stark contrast to Brisingr (and even like all the Eragon parts within Eldest), which lagged and honestly felt like huge chunks should never have made it into the final book.

This is the first book that we actually get to see Galbatorix (he took over Murtagh and Thorn briefly in Brisingr to talk to Oromis, but that wasn't the same).  He reminded me a lot of Thanos from the Marvel movies, wanting to make a better world but not really thinking about the consequences and hurt of doing so.  In a lot of ways that kind of made him scary because you could see the appeal of what he was proposing (I was actually amazed that none of the characters willingly chose to join him, especially since he was so charismatic when he chose to be).

Roran takes a back seat in this book, which is a shame but understandable (a lot of the action took place around Eragon and the dragons/Eldunari).  Surprisingly, we actually got to see more of Galbatorix thanks to Nasuada (as well as more Murtagh, which was nice as he wasn't in battle).  I still think Murtagh is a super interesting character, and honestly would have loved to see much more of him struggling against and learning from Galbatorix.

Eragon also feels like he has grown up a bit.  I didn't feel like he was looking down on people as much as in the other books (or whining that he's not as powerful as he should be, even though like everything was coming to him easily).  So that definitely made the book more pleasant to read.

I also really liked that Arya and Eragon don't end up together (although at the end it feels like a near miss).  With all the times she told Eragon no, she wasn't interested, and how he kept apologizing, saying it wouldn't happen again, then making his feelings plain to her again anyway, I was getting super fed up with the whole thing.  Like come on, Eragon, no means no.  I was also laughing because by the end of the first book, I had a feeling that those three eggs would end up with Eragon, Murtagh, and Arya, and I ended up right.

Oh, and I was pleasantly surprised that Brom didn't come back from the dead somehow.  I don't know why (probably the similarities to Lord of the Rings), but I kept expecting Brom to show up again.  So very glad that didn't happen.

One thing that annoyed me to no end in this and the other books was how characters wouldn't explain plans to the reader while they were explaining something to someone else.  Like in the aftermath of Inheritance, when Eragon's asking the Urgals and Dwarves if they want to be Riders, the book says  things like "The Herndall listened in silence as he explained, though Garzvog stirred, as if uneasy, and uttered a low grunt.  When Eragon finished, the Herndall did not speak or move for several minutes..."  Then the book reveals the plan later when he's actually changing the spell to make people of those races Riders.  It's a lazy way to build suspense, and the books were rife with this.

So that's it, the Inheritance Cycle is read!  It feels good to cross off these three huge books from the List. :)
Posted by Shauna at 4:50 PM